The SKALE Network: Why Randomness, Rotation, and Incentives are Critical for Secure Scaling (Part 2 of 2) 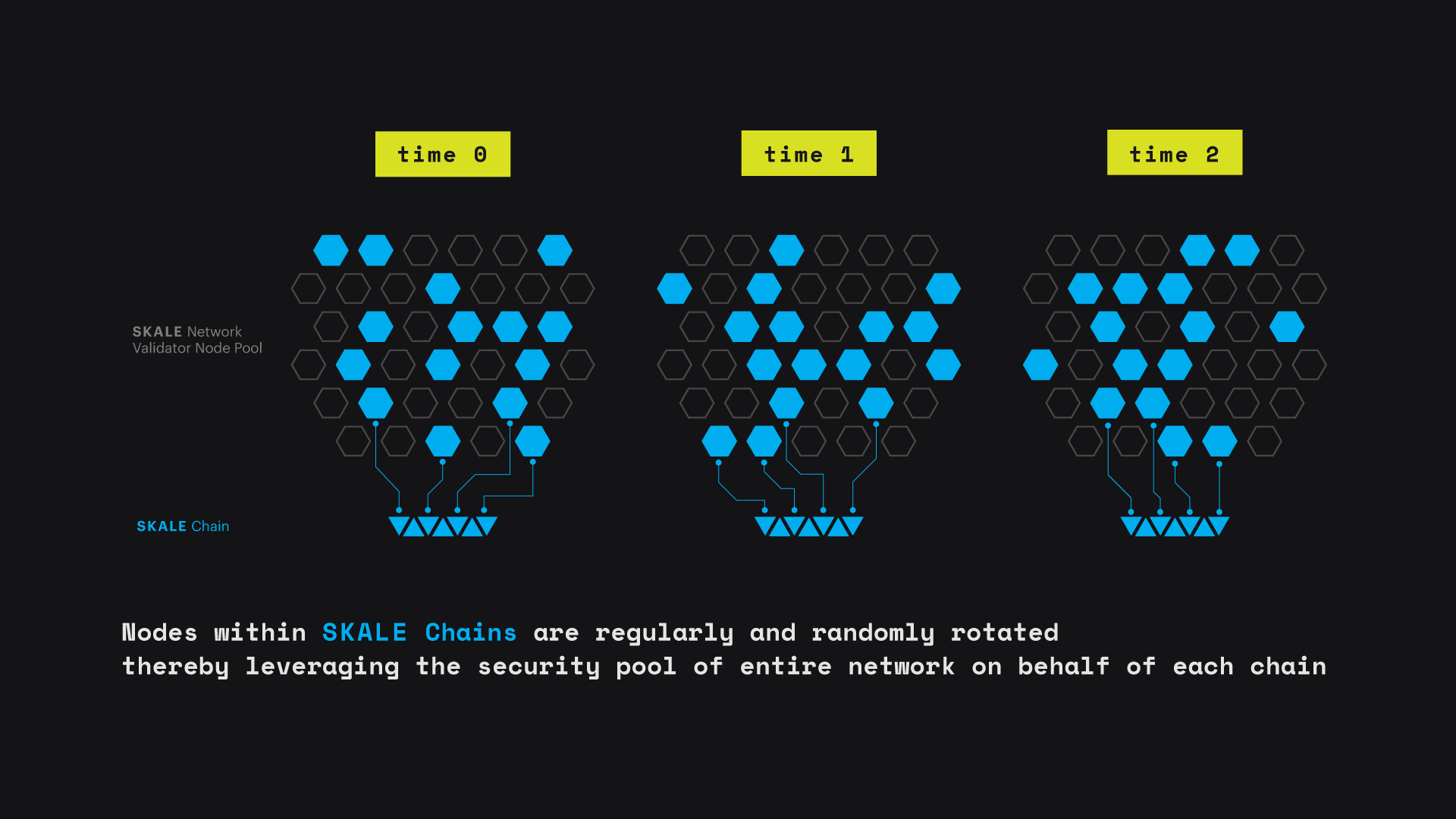 This post is the second in a two-part series on Why Randomness, Rotation, and Incentives are Critical for Secure Scaling. The first part can be found here.

The Role of a Validator Node

The node core in a validator within the SKALE Network has a primary role in moderating the network – a role that is in addition to self-organizing around the validation of sidechains and subchains. Each node gathers and uploads data in service of keeping the network honest and operational. Each node in the network is continuously monitoring a random set of 24 nodes, gathering data and pulling log files from the other nodes. The node core will score each of the other nodes, looking at uptime, latency, performance and other metrics and then basing the score on whether certain thresholds are met or not. This is called the SKALE SLA function.

Nodes submit their metrics to a contract on the mainnet which blends, processes, and aggregates them to get a clear picture of network and node health. If a node is deemed to have performed well, it gets to participate in the award from the bounty pool. If a node performs poorly or acts maliciously, it gets flagged and is pulled from the network. In the case of the latter event i.e. suspicions of cheating, indications of having been hacked, or engagement in other malicious acts, a review process will be initiated which could end up with node stake getting slashed.

By way of example, if there are a thousand nodes in the network and they all performed well, they will each participate in the monthly proceeds from the bounty pool. The distribution to the validators is not necessarily shared equally as there is a plus/minus component that is based on how long a node is staked into the network. Nodes that are bonded for twelve months, for example, will get a slightly greater percentage than those bonded for three or six months.

The Importance of Staking by Validators

As highlighted previously, each validator will be staking SKALE tokens into the network as part of their participation as a validator. This bondedness plays a fundamental part in securing the network. The staking amount will be approximately $100,000 USD equivalent at the onset. These stakes will live in the mainnet and serve as a measure of faith in the network and as recourse against bad actors.

If a node tries to perform a double spend, for example, and gets caught by the system, the offending node’s stake will get placed into escrow (which essentially serves as a penalty box). During the first year of the network, a review board comprised of validators will vote on as to whether an infraction occurred. If the decision is yes, the validator will lose their stake, in which case, it will either get burned or remain in the penalty box.

The governing body for the network is the N.O.D.E. Foundation. This foundation maintains the procedures for how the review process works and controls its operation. The initial panel will be comprised of approximately 10 validators, if and until such time as the process becomes automated in part or in whole. During a review, each member of the panel will get an opportunity to look at code, log files, transaction flows, and other data to determine if any improper action has occurred. The foundation believes that it is important that validators play a primary role in policing. Given their bondedness into the network, validators are highly incentivized to act in their best interest in guarding and preserving the integrity of the network.

Forking contracts and protocols is always a possibility in a decentralized and open system. And while it is possible for someone to fork the SKALE protocol, they would not get the benefit of network and its depth of nodes. Chains running outside the network will be far less secure than those running in network. Chains running outside the network will not be able to rotate random nodes in and out, which means they will be operating much the same as current Layer 2 solutions – using a small number of validators that remain static and unchanged.

What happens with this type of fixed validator model is that a bad actor only needs to co-opt 2/3rds of the nodes in a chain (typically a single or low two-digit number). A bad actor in the SKALE Network would probabilistically need to co-opt 2/3rds of the entire network in order to land a ⅔ percentage of their malicious node into a Chain. Given the large number of anticipated nodes in the network, the number will be exceedingly large.

An Additional Thought on Forking

You can fork the code of a protocol. You cannot fork the people involved, the understanding of the trade-offs, the business relationships, the integrations, the partnerships, the capital locked up, the brand building, and the customer service. Forking out a fee will be rare. – Richard Burton (@ricburton), early Ethereum developer and community leader

In Theory vs In Practice

The decentralization community, with its cryptographic underpinnings, prides itself on its theoretical  analysis, especially when it comes to network models and protocols. This academic rigor is an important element in validating approaches and arriving at workable decentralized solutions. Analysis of Layer 2 solutions is no different. A common critique mentioned for many solutions in Layer 2 is that they are susceptible to manipulation within the validation layer. The belief is that co-opting of or collusion between validators opens the door to front-running, double spends, and other malicious activities.

These critiques are not unwarranted as smaller validator sets pose an undue security risk. With regards to SKALE Network, theoretical analysis often underweights the benefits of its pooled validation model as well as discounts the positive impacts of its network economics. Models based on static validator sets ignore the significant benefits that randomness and rotation offers, especially as it relates to collusion resistance. A sufficiently large number of validators in combination with random selection and frequent rotation makes bribery and collusion exceedingly difficult. Add in significant staking requirements, solid validator rewards, and an initial group of highly vetted validators and the probability of node collusion drops significantly.

The Ethereum mainnet is theoretically at risk if 51% or more miners decide to collude and perform double spend or engage in other malicious acts. In contrast, SKALE’s consensus algorithm raises the threshold to 67% for double spend (greater than 33% to pause consensus). In addition, and in comparison to other second layer solutions, SKALE’s pooled validation model minimizes risk by leveraging the law of large numbers and putting proper economic incentives in place.

Another View of the SKALE Model

One way to look at the SKALE Network is as a sophisticated container orchestration mechanism combined with a payment system – all in the service of running an elastic blockchain network. The SKALE protocol and the SKALE token enable this unique mix of processing potential with incentivized delivery.

At the surface level, the network offers multiple chain sizes of chains, storage options, and other advanced features but underneath this provisioning layer lies a unique combination of orchestration and payment. Mainnet staking by both validator and customer staking, in combination with the interactions of the node cores and mainnet contracts, creates a robust security framework in the service of vast numbers of sidechains.

Even with improved scaling of public mainnets – Ethereum 2.0 being a primary example – there will always be the need for effective scaling solutions that augment public chains and provide additive capabilities. Decentralized applications with even the slightest complexity or throughput will need the performance and flexibility that elastic blockchains and sidechains provide.

Layer 2 solutions, therefore, must not only feature flawless connectivity with public mainnets but also offer a validator and security model that is efficient, scalable, and collusion-resistant. The SKALE Network is built with these capabilities in mind – making use of random node selection, node rotation, and the right network economics to allow for high performance and faithful transaction resolution.

This combination of randomness, rotation, and optimized network economics are an effective model for scaling Ethereum. It not only creates a better environment for implementing and scaling decentralized applications, it also opens up the potential for an ever-expanding spectrum of use cases – from games and decentralized finance to productivity and media applications and everything in between.

SKALE Labs is the creator of the SKALE Network, an elastic blockchain network protocol. The mission is to make it quick and easy to set up a cost-effective, high-performance sidechain that runs full-state smart contracts. SKALE Labs aims to deliver a performant experience to developers that offers speed and functionality without giving up security or decentralization. You can follow SKALE Labs on Telegram, Twitter and Discord, visit the SKALE website, and check out our Developer Documentation.

Disclaimer — This document is for informational purposes only and does not constitute an offer or solicitation to sell shares or securities in the N.O.D.E. Foundation, SKALE Labs, Inc. or any related or associated company. Any such offer or solicitation would only be made by a confidential offering memorandum and in accordance with applicable securities and other laws. 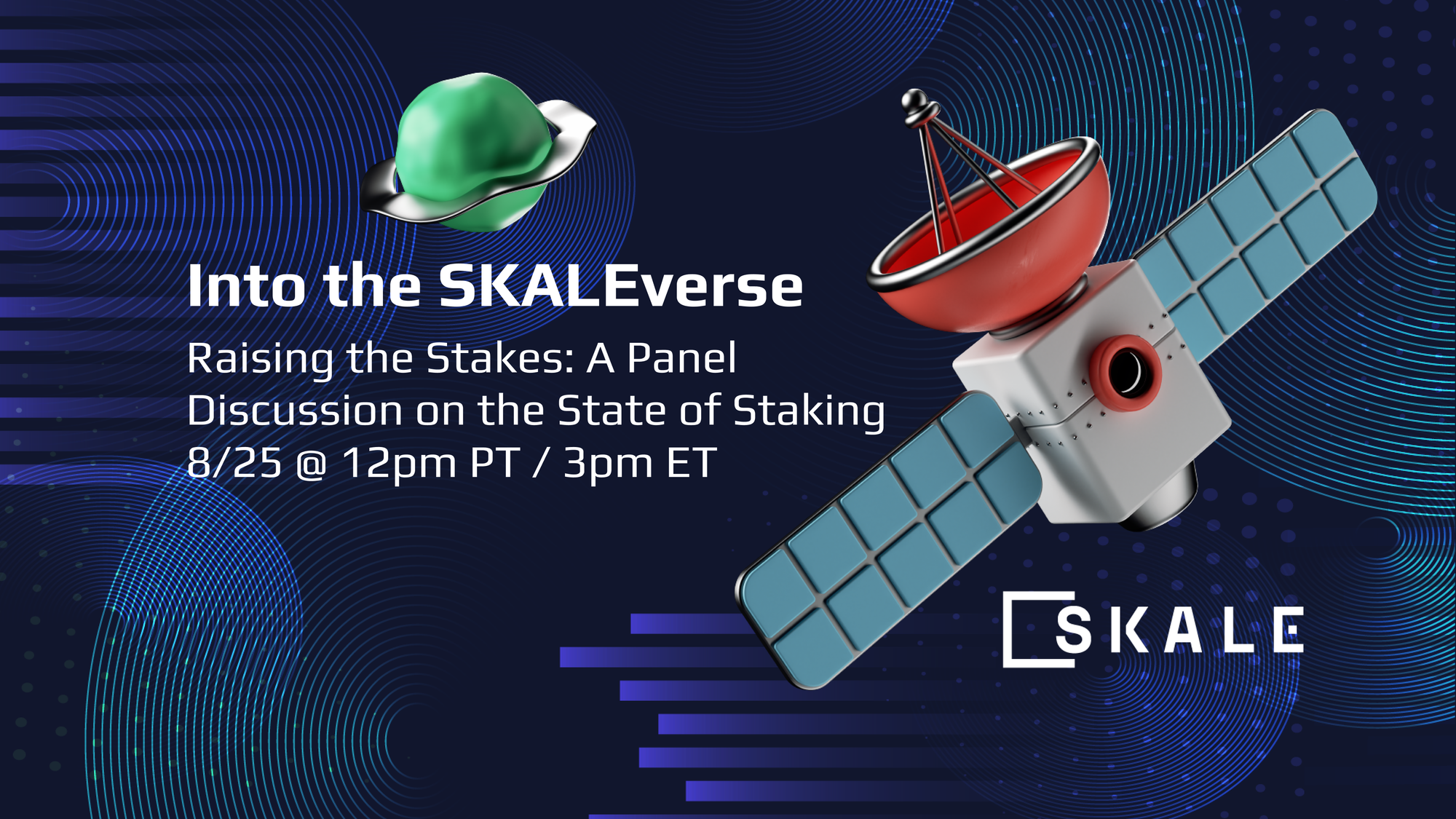 Into the SKALEverse #9: Raising the Stakes - A Panel Discussion on the State of Staking

Join us on August 25th for a panel discussion on the state of staking as The Merge, and Ethereum's transition to Proof-of-Stake, approaches. 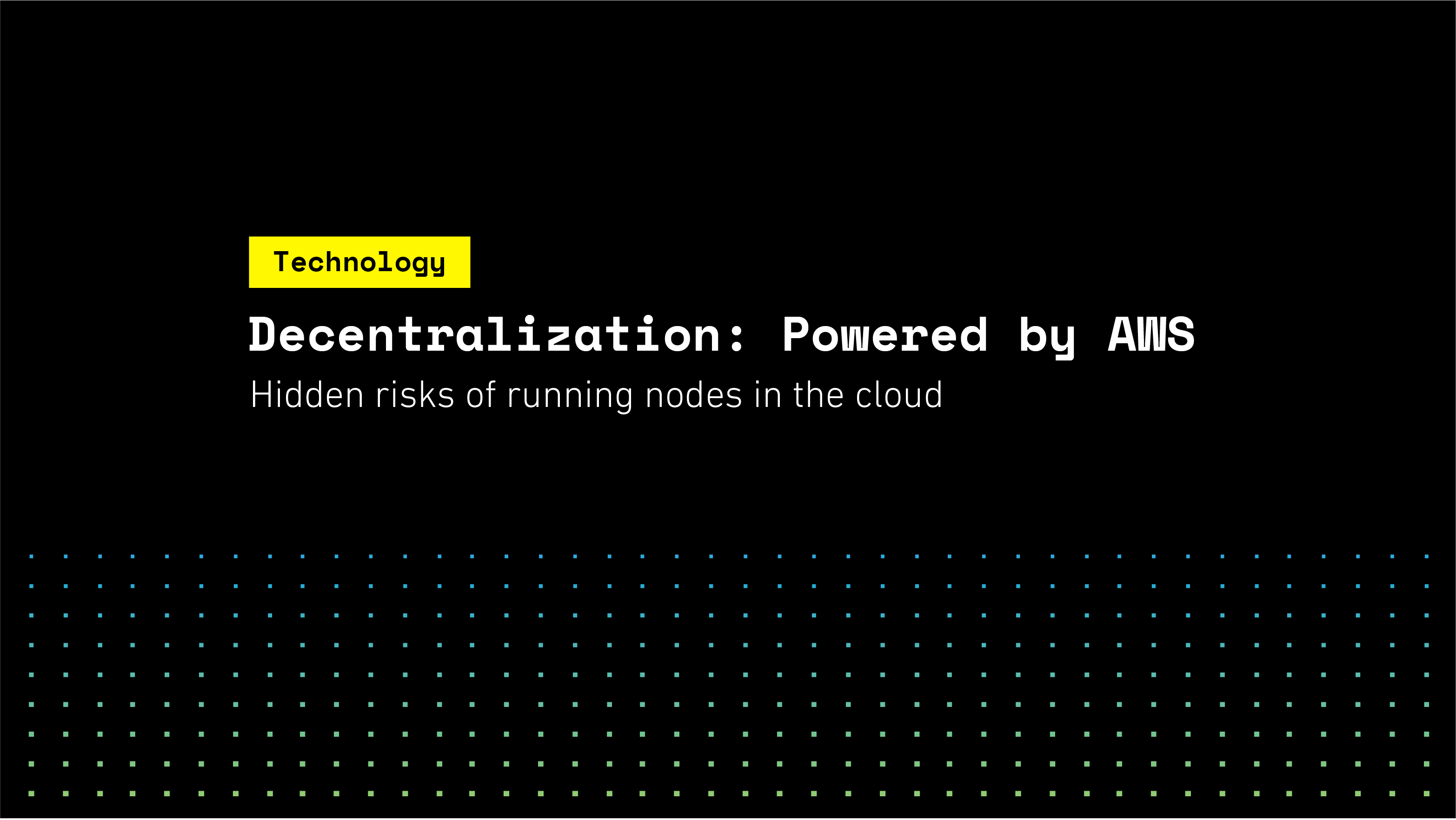 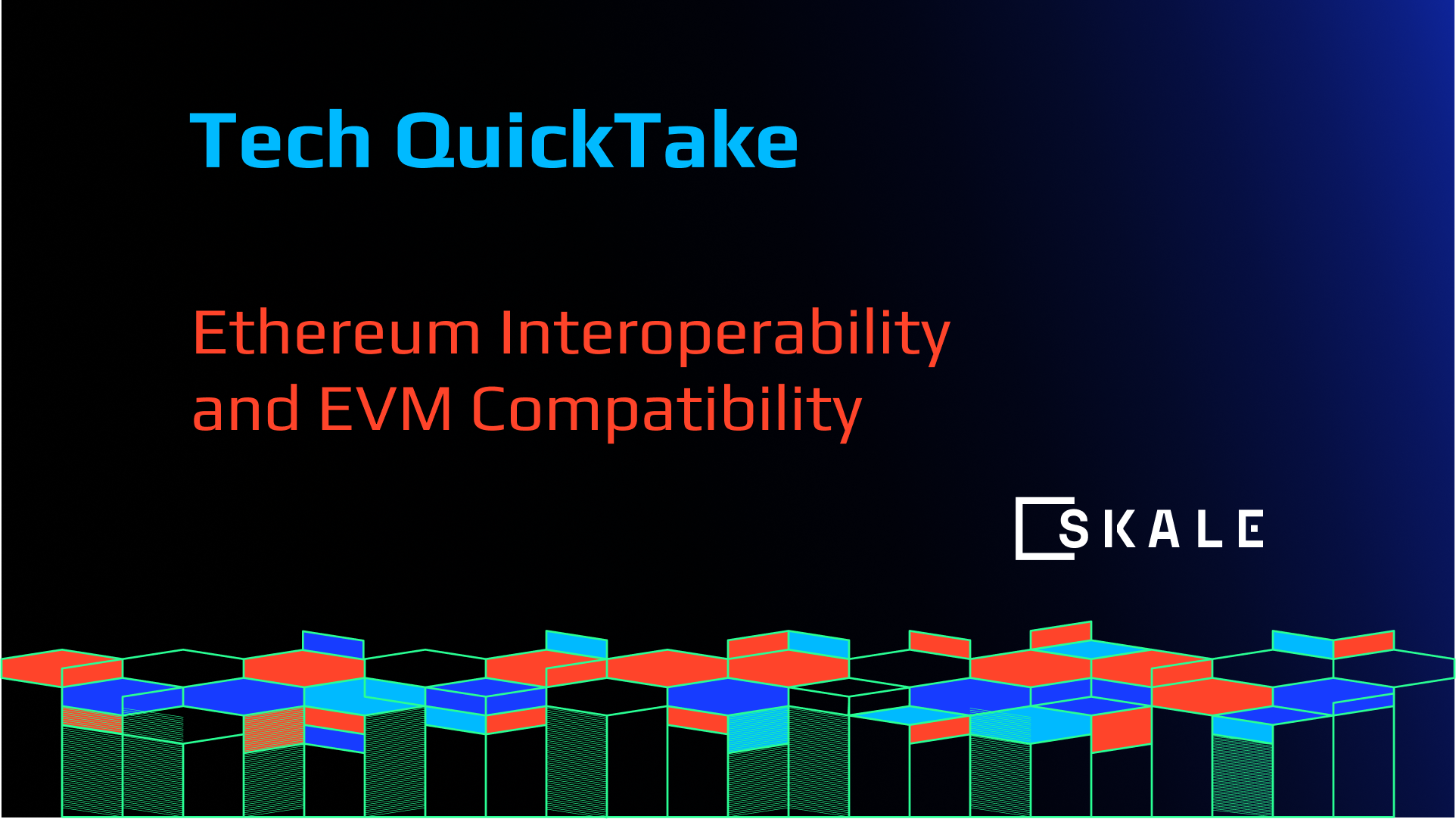 Learn more about building on the SKALE Network.