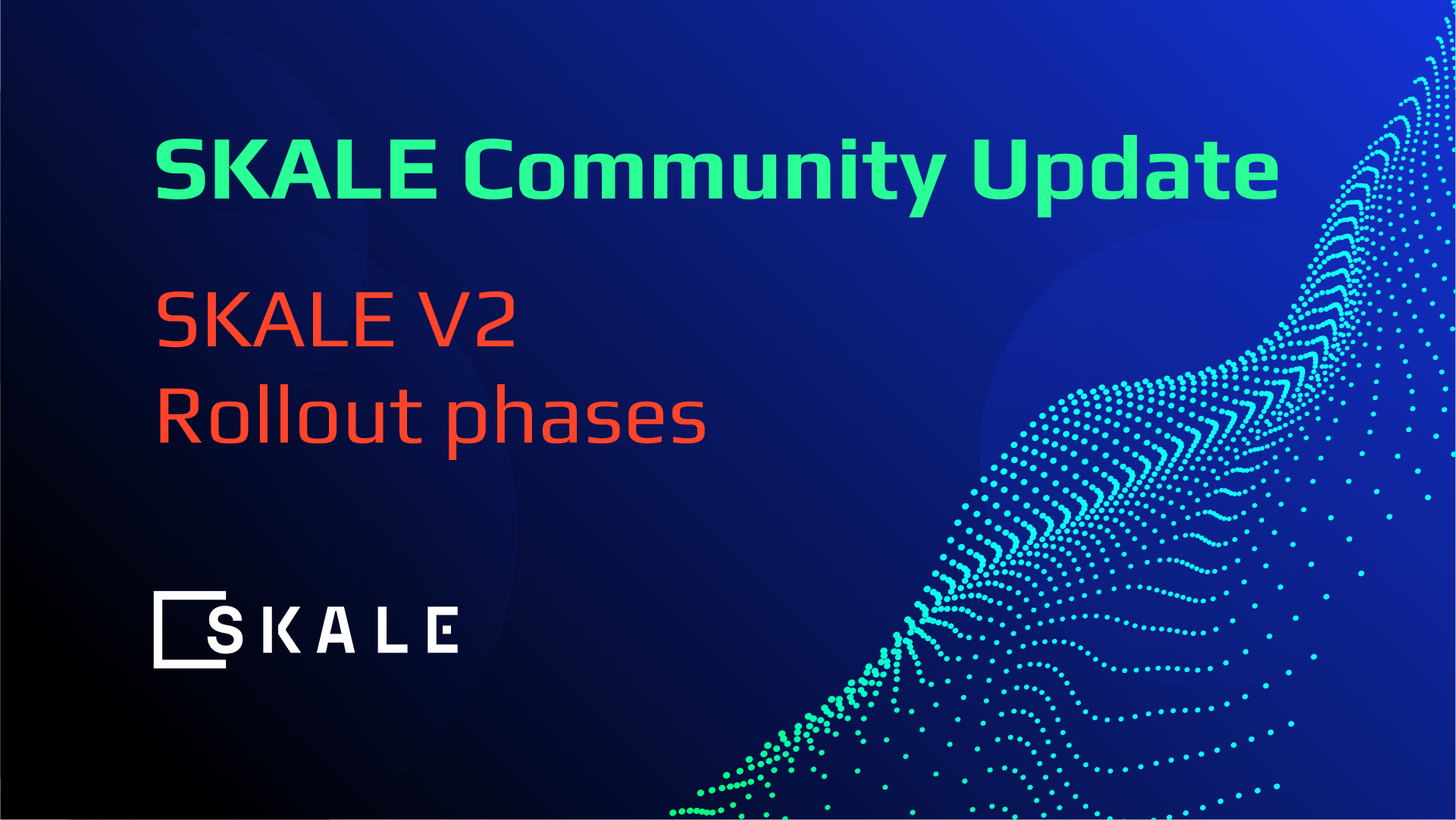 We want to thank everyone for coming on this journey with us. It’s been a long road, and we’re excited about this upgrade and what it will do for SKALE’s trajectory. SKALE’s goal has always been to bring the power of Ethereum to 1 billion users and beyond, and this release goes a long way to supporting booming categories like Defi, NFTs, Web3, and blockchain gaming.

V2 successfully underwent a rigorous QA, Audit, and TestNet gate that had 100+ people from 50+ organizations putting a lot of energy and effort into making it work.  We’re incredibly thankful to have such a great community. SKALE V2 is an evolution from a network of siloed L2 chains to a high performance modular L1/L2 hybrid network of scalable interconnected blockchains. That means SKALE is not a single blockchain, but a network of many blockchains all creating a dynamic interconnected community of dapps that will organically grow and work together.

In addition, SKALE V2 will not only let people utilize Ethereum generated tokens, but will enable Dapps to mint ERC Tokens/NFTs at zero cost directly on SKALE. That will allow dapps and projects to build out rich experiences and offerings right from within the SKALE ecosystem. It will truly be a SKALEverse that people can wander through.

V2 will be a phased rollout as opposed to a single phase where everything happens in one day or week. There are three phases to the launch. This is done because unlike a single product offering, that can be released all at once and available as a single download, SKALE is a decentralized open source network. That means that any given upgrade or launch has dozens of people and organizations involved in building, testing, and ultimately deploying. Dapp developers, 46 validator orgs, partners, and more need to come together to successfully deploy any upgrade, making this a multi-week process.

Phase 1 was the technical implementation of the upgrade, a process which began April 18 and Node upgrades completed on April 24th.  During this period, the SKALE Mainnet Smart Contracts were upgraded allowing the second step of the upgrade process to occur.  After these contracts were upgraded the 46 validators orgs began the process of upgrading their nodes. Because validators have their own hardware configurations and network setups, the process happened over a period of several days.  As a final step, an optimization to SKALE File Storage will be pushed to the Network on May 4th. The need for this patch was discovered on Thursday, April 28th. It was decided to push this prior to dApp rollouts to minimize network impact. This push should take 1-2 days and will mark the last step of Phase 1.

Phase 2 entails the launch of SKALE “Hubs” and will commence the first week of May. Completion will be dependent upon the work and process of SKALE Hub Community Members. The teams are working around the clock and are getting very close to launch, but have not yet committed to hard dates. We will be meeting with these teams early next week and will continue to share updates as soon as they are made available.

It’s important to remember that Hubs are fully run and operated by different organizations in the community and not the core team. The core team works to support their efforts, but does not lead or govern their projects or timelines.

Hub Chains will be created next week by the SKALE Manager Contracts on the Ethereum Mainnet. Their rollout timing is entirely dependent upon their own schedules, tasks, token launches, public sales, and communications strategies. The Core Team will be supporting them as much as possible, but is not at liberty to speak towards their timelines. Please stay tuned to the SKALE blog and Ruby blog to stay abreast of timing updates. We will share all information as soon as we have it.

Two primary Hubs will launch on the SKALE V2. One is the ruby.exchange proposed “Europa” Hub , whose purpose is to create a Liquidity and ETH Mainnet Bridge aggregation hub for consumers and other dapps being built on SKALE.

Europa’s purpose is to be the first to optimize token mapping standards and bridging for interchain messaging. This is one of the key learnings from some of the other Layer 1 projects that have had issues with resolving many different versions of a given token as each new project/dapp created their own unique token mapping contracts, and so slightly different versions of a token. This alleviates that issue by creating freedom of movement throughout the universe of blockchains for dapps. The work for getting the hub up and running includes:

The second hub after Europa will be an NFT Marketplace which is important for consumers and creators alike, giving them liquidity market places for NFTs. By pooling initial NFT liquidity into one chain, integrations are easier for NFT Marketplaces. NFTs from Dapps running their own SKALE chains will be able to move NFTs seamlessly to the NFT Hub and connect to marketplaces, Europa, and zero fee user generated NFT services.  The NFT hub will also be a completely community run hub and will follow a similar launch trajectory to Europa.

Phase 3 of the SKALE V2 roll out involves the broader dapp chains that will be generated by the network to support a variety of dapps across Gaming, Web3, other Defi projects, and a SKALE community chain.

Phase 3 will commence immediately following the launch of the Europa Chain as the dApp token mapping and bridging will be dependent upon Europa. One of the main reasons this is a phase 3 activity is that the SKALE liquidity and NFT hubs are both critical components to the creation of a larger strategy to ensure that the universe of SKALE chains can work with each other in as efficient a manner as is possible from launch. The developer community was critical to identifying key requirements for the launch of a successful interconnected multi-chain network of blockchains.

As with the other phases of this rollout, SKALE will be reliant on schedules that are not maintained or owned by the core team.  We are working diligently with the different projects to get them live and running on mainnet as quickly as possible. That said, within 1-3 weeks of the launch of the liquidity hub, there will be launches of new projects on the V2 generated SKALE chains, not to mention those projects that are already live on SKALE will be moving their projects on to V2.

This is an incredibly exciting moment in SKALE’s history, and we believe one that the whole community will be able to look back and say, that was the beginning of an amazing creation boom in Web3 history.