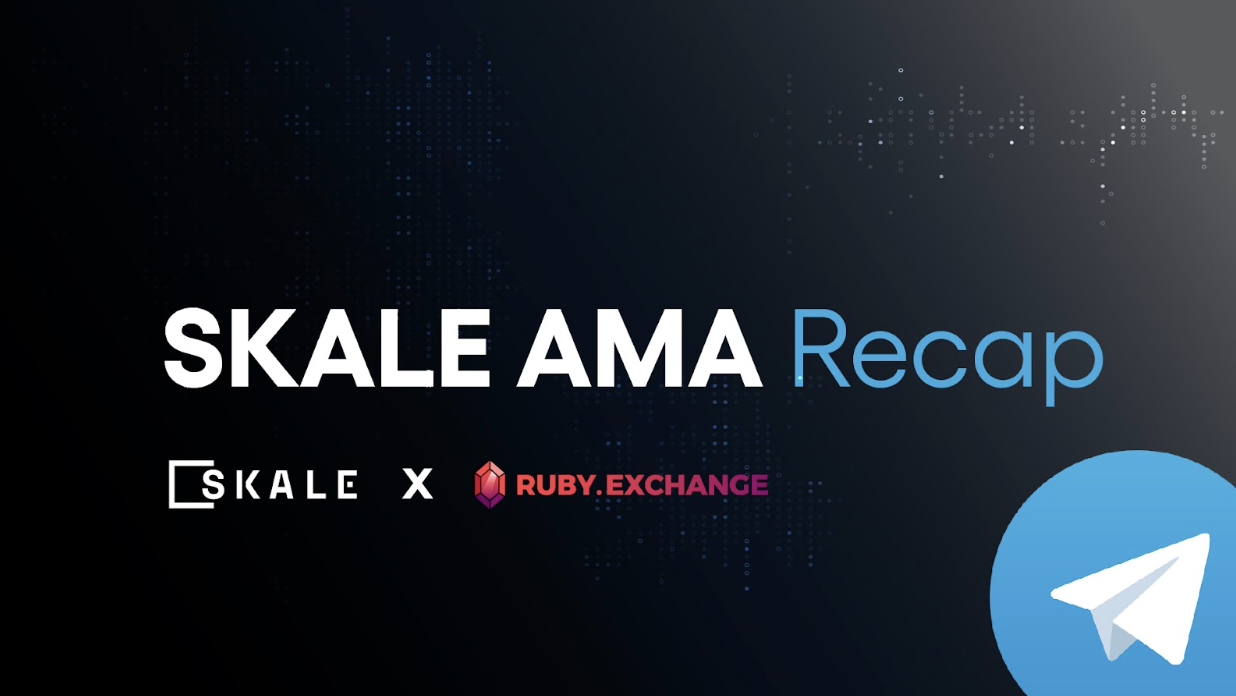 Last Friday, December 9th, we kicked off a Telegram Community AMA with Ruby.Exchange, an NFT-powered AMM and Yield Farming DEX project currently building on SKALE. We'd like to give a massive thanks to all those who joined this AMA. In case you missed it, read the full transcript from the event below!

Hey everyone, I'm Dolomite from Ruby.Exchange, and I am excited to be here. I'm a staunch believer in the power of blockchain and Defi technology and have worked in different capacities in the industry for the last few years.

I've taken those experiences and decided to help launch Ruby, which is the decentralized exchange that I always wished existed. We're focusing on user experience and are building many different features to further that end.

Hopefully Ruby.Exchange needs no introduction to the SKALE community. The Ruby AMM launched in beta on June 2022, offering gasless trading for major tokens with a dual-DEX model consisting of a stableswap plus XY=K pools. NFTs enhance the user experience, and the platform takes full advantage of SKALE's unique technology.

With the integration of Metaport, Ruby is on the point of opening up to the entire SKALE ecosystem - and playing a key role in connecting the SKALEVERSE in the process.

Q1. SKALE recently launched something called Metaport. Can you tell us what that is and why it matters for Ruby users?

The SKALE network takes the form of a potentially unlimited number of high-throughput EVM-compatible chains. These chains are connected by (and secured by) Ethereum L1, and the Europa SKALE Chain on which Ruby is hosted includes a fast, decentralized bridge to the mainnet. However, there have been no SKALE-to-SKALE Chain connections up to this point.

Metaport is SKALE's new interchain widget. It enables users to transfer tokens directly between SKALE Chains instantly and with zero gas fees - making moving tokens around the SKALEVERSE as frictionless as a regular SKALE transaction. Ruby has now integrated Metaport into their website, allowing users to send and receive tokens from the Europa SKALE Chain to any other supported chain.

This is the point at which a collection of independent SKALE Chains truly becomes the SKALEVERSE, a single ecosystem in which users can access any dApp seamlessly, and new projects can benefit from SKALE's growing network effect.

Q2. You mentioned the Europa SKALE Chain. What exactly is that?

The SKALE network features two types of chains: dApp-specific chains, and "hubs," which support clusters of related projects. For example, there is the Calypso NFT Hub and the forthcoming Nebula Gaming Hub.

Europa is a shared SKALE Chain that will host a collection of liquidity-related dApps and services, including the default bridge between the SKALEVERSE, Ethereum mainnet, and Ruby.Exchange itself. In due course, it will have a crowd-funding platform and other DeFi dApps that will benefit from immediate proximity to each other.

Europa also plays a vital role in standardizing popular tokens like ETH, USDC, etc. Having a single default mainnet bridge means there will be only one version of each token, so there will never be problems with token compatibility across different dApps.

Q3. Do you plan to come out of beta soon?

Yes! Now that Metaport is integrated, all of the main pieces are in place, and we're very nearly ready to come out of beta. One of the key things we're looking forward to is more SKALE dApps adding their tokens to Metaport, allowing users to transfer them between their native SKALE Chains and Europa, where they can be traded, and LP'd on Ruby.

Separately, we are finishing up a Wyre integration, enabling anyone to buy crypto and have it credited right on Europa using a credit card, making it super easy to on-ramp funds to deploy into the SKALEVERSE.

Q4. As we all know, NFTs are built into Ruby's UX. What are your plans for the way they will be used in the future, and will there be new gemstone NFTs?

We currently have gemstones that enable users to make swaps with zero trading fees and gems used for unique profile images. We don't want to give too much away at this time about what we want to implement in the future, though you can  find some clues in our Roadmap.

In short, we think NFTs have a lot of potentials that goes way beyond representing digital art and in-game items. NFTs will be one of the core technologies of Web3, and the sector has barely started exploring the use cases for DeFi. SKALE's gasless platform and on-chain storage mean we can completely decentralize metadata and ensure 100% data availability, which opens up some exciting new applications. Watch this space!

Q5. What else should we expect from Ruby's Roadmap in the coming months?

It's important to state that the "Roadmap" we've published in our blog isn't intended to be a set of timed, sequential milestones. Too many projects have fallen into the trap of promising specific features to deadlines months or even years in advance, which is not only unrealistic but doesn't take into account how the fast-moving DeFi space will change in the interim. We want to retain enough flexibility to react to evolving market conditions and user needs.

Moreover, as we come out of beta, we'll be looking to engage our growing community more and more, give them greater responsibility for the governance of the Ruby AMM Protocol, and specify the direction of future development.

Ultimately, we intend to work towards as great a degree of decentralization as possible. With any piece of key infrastructure for any blockchain system, it's critically important to remove any single point of failure. We hope the community will step up and play a greater role in that as the next market cycle and wave of adoption get underway.

To these ends, we have recently launched the Ruby Community Discord, which offers a better venue for ongoing conversations than Telegram.

Q6. You mentioned Discord - where can I find that?

Join our Discord to start participating in the discussion. We'll soon be running an engagement campaign with RUBY and other rewards, so don't miss out!

We'll maintain our Telegram channel for the foreseeable future but encourage everyone to move to Discord. You can also find us on Twitter and, of course, check out the platform.

Q1. What is your strongest advantage that you think will make your team lead the market? [@FeLix_com]

I think there are a couple of different answers that I can give here, but if I had to narrow it down to one, I would say our project's strongest advantage is our deep understanding and intimate experience with all things DeFi. We've been in this space for many years and have watched the industry take shape. As DeFi summer materialized into something real, tangible, and unstoppable—we were there participating every step of the way. We've worked on other successful projects before, and our team's background spans the gamut from portfolio management to algorithmic trading and market making. When I mentioned earlier that we wanted to build the DEX we wish existed, that wasn't just empty talk.

There's always room for improvement, and we're here to take the best pieces of previous projects to build something greater than the sum of its parts.

Q2. How secure is Metaport? Should we be worried as there have been many bridge hacking incidents in the past years? (@Jack)

We've always been very confident in Skale's commitment to security. While the many bridge hacking incidents in the past year or so are certainly something that everybody should be aware of, we think it just further highlights the need for a constant and vigilant threat model assessment—this includes continuous audits and having as many white hat auditors look over critical code prior to deployment, not after.

This is something that Skale has done very well at. They prioritize the safety of user funds at every step of the development process. If interested in learning more about the different audits that Skale has taken and continues to take, it's a good idea to reach out to their team directly.

We, as a project, are not worried about Metaport's security!

Q3. How are tokens going to be transferred/moved across other chains that are not Ethereum or skale base? [@yinx41]

We're already in talks with different 3rd party bridging service providers to connect the Europa Hub and greater Skale ecosystem to the many other L1s and L2s in existence. That event will mark another large milestone in the growth of SKALEVERSE as users will have more options and the barrier to entry will be further lowered for the community.

Q4. Are there opportunities for NFT pools? (If that's a thing) earn interest on semi-fungible tokens. [@Dblade5]

This is an interesting question actually. While it isn't officially planned at this point, there's nothing that is stopping this from happening in the future. Our guiding principle and the ultimate goal is to have the Ruby community take the reins and guide, shape, and ultimately steward the protocol going into the future. If you'd like to see something like this happen, we encourage you to participate in governance and get active in the community!

Q5. To withdraw from ruby exchange back to Ethereum L1, what is the fee structure like, and when are you planning to onboard L2 chains? [@yinx41]

There isn't an actual fee structure for withdrawals back from Europa -> Ethereum L1. It's really just dependent on mainnet gas fees at that point in time!