Ruby.Exchange Guest Post: SKALE and the Future of Web3 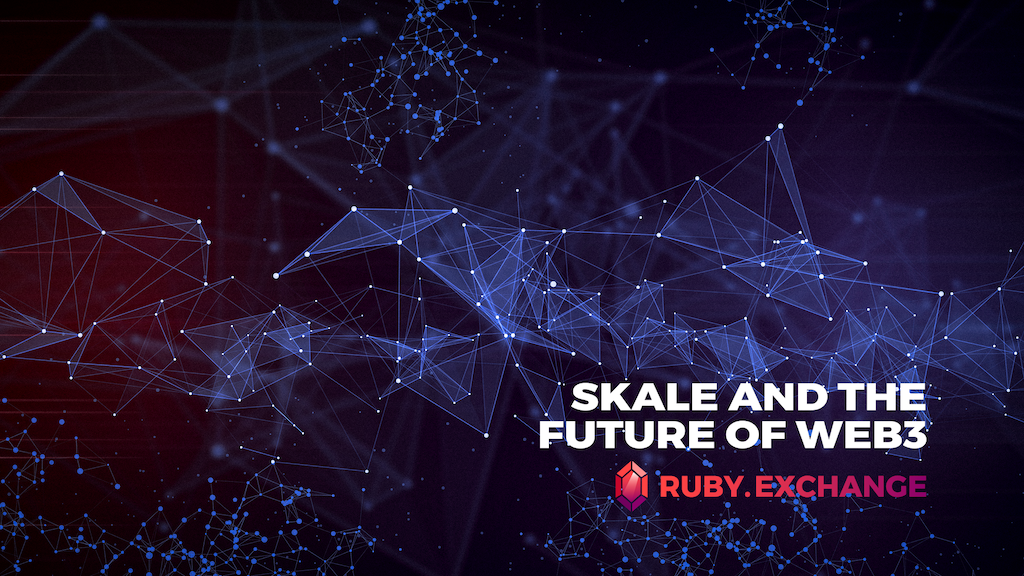 TL;DR An implementation of Web3 that is fit for purpose has certain prerequisites, in terms of functionality and user experience, that SKALE is one of few blockchain platforms currently able to deliver.

Bear markets are a time to BUIDL. They may not be as fun as the up-only days of a late-stage bull market, but they're when things get done, dApps are built and refined, ideas are tested, and solid foundations are laid for when the bull eventually wakes up again.

Ruby has always intended to be around for the long-term, so this is a good time to refine our thinking about what we're building and what we want our future role to be, and to use this opportunity to position ourselves to make that a reality.

Ruby is an AMM, but our aim is to be what might be described as the "decentralized centre" of the SKALE-based Web3 ecosystem (or SKALEverse). That includes DeFi, NFTs, games, social media, metaverse dApps, and very likely a bunch of other things that haven't been invented yet.

In other words, the future of Web3 is going to encompass almost the entirety of life, and we want Ruby to be the place users come to buy, sell, and LP tokens from dApps all over the SKALE network.

What Kind Of Web Do We Want?

‍Given the interest major corporations are showing in Web3 and the metaverse (looking at you, Twitter, Microsoft, Meta...), it's worth spending a little time considering not only what Web3 will offer, but how it will go about doing it.

To put it another way, what should the web of the future look like? Not, most of us will agree, the centralized dystopia we risk ending up with if we let the corporate giants drive it. As a starting point, we might be looking at something more like Neal Stephenson's original vision of the metaverse in Snow Crash—which was published in 1992, so it's a good idea to throw in some insights from his later work, like 2019's Fall, Or Dodge In Hell—than the OASIS of Ready Player One. (Having freed OASIS from the tyranny of centralized corporate control by the end of the movie, the protagonists miss the point with facepalm-worthy irony by shutting it down for two days a week.)

Creating an open, accessible, decentralized, user-friendly version of Web3 comes with certain prerequisites, in terms of functionality and the infrastructure that underpins it.

‍Snow Crash's particular brand of anarcho-capitalism is brought about by hyperinflation and a market collapse. While that would never happen here (right?), and while a society where everything is for sale is a scary prospect, one of the key advantages of a blockchain-powered web is that it's vastly easier and more secure to create, manage, use, and trade digital assets of all kinds. A big part of that means rethinking NFTs.

The best-known digital assets (BTC, ETH, etc) are fungible, but some assets need unique or limited-edition tokens to represent them. NFTs aren't really so conceptually different to fungible tokens; it's just that most global users who have heard about NFTs have been distracted by digital simians, pixel art, and other images owned mainly by high net-worth individuals.

Ultimately, an NFT is just a certain type of digital asset, doing a job that ERC20s and their successors aren't suited to. It's still a token that lives on the blockchain and can be transferred and traded, like any other token, just with a couple of other special properties (namely indivisibility and low supply).

While all blockchain tokens are by nature financial assets (because they can be traded) they can be much more—including something closer to the original meaning of a software "token". NFTs can be and are used for identity and rights management. They can be email addresses and website domains (like ENS, Unstoppable Domains, DecentraWeb, and Clet). There is an increasing trend towards users displaying a prized NFT as their profile picture (PFP), making it a kind of universal identifier across social media accounts—and those social media platforms are starting to offer ways of verifying NFT ownership for users. The same NFTs can be used as access passes—to games, to premium services, to exclusive clubs (like BAYC), to information, and even to the workplace in the metaverse.

The "NFTification" of online services is one of the key and under-appreciated themes of Web3, and will result in Web2 apps being completely reimagined to give the user greater control and ownership of their identities and data. Instead of logging into websites with different usernames and passwords managed by centralized companies, users will register with a token that might act as a PFP and unique identifier for many sites—or they might receive NFTs from these services that offer them access to specific functionality.

In this vision of the web, which multiple projects are already building, NFTs are widely  and routinely used by everyone—not just to represent art, and not just to represent items that are obviously financial assets. They will be a common way for users to access online services.

‍Today's Web3 dApps can reasonably (and sometimes charitably) be described as Web 2.5. They're built using smart contracts, but they generally rely on centralized websites, and a large portion of their logic occurs off-chain. There are good reasons for that, including the gas costs entailed in putting more than the minimum activity on-chain, but the so-called "decentralized web" is not, yet, particularly decentralized.

This centralized infrastructure leaves single points of failure that are vulnerable to hackers, outside intervention, or even just plain old downtime. Users can't afford to have their accounts or potentially their entire online presence shut off because the hosted service that holds their identity NFT metadata suffers an outage.

More and more DeFi and Web3 projects are using IPFS, sometimes along with services like ENS, but that's not a perfect solution. Even IPFS has a series of problems that relate to availability, cost, and centralization.

On-chain storage is the only truly safe means of guaranteeing 100% availability and uptime for all the data users will need to access the full suite of Web3 services—and for most chains and projects, that's simply not an option, either technologically or economically.

3. End our reliance on gas

‍It's reasonable to expect users to pay fees when they're conducting financial transactions, just as they do in the TradFi system (even if those costs are typically hidden). It's not realistic to expect users to pay every time their Web3 activity results in an on-chain change. As a recent article on DappRadar notes, "Web 2.0 has been free for decades, but Web3 is currently not."

Ethereum mainnet is the worst culprit, but almost every L2 charges gas fees of some kind; it is the orthodoxy in blockchain circles that you need tx fees to avoid spam and DDoS attacks, as well as to reward miners. Some L2s have pushed costs right down to a few cents, less than 0.1% of typical fees on Ethereum mainnet, but that is not low enough. Even $0.10 is a large transaction fee for a significant percentage of the planet, when you consider that median per capita income is around $5,000, or less than $15 a day. It doesn't take many transactions to add up and price many users out of Web3 altogether.

Even for users in high-income countries, there are other reasons for addressing Web3's current dependence on gas. It's a bad UX to be forced to keep topping up your wallet with platform tokens. Users just want to, well, use dApps, not continually babysit their wallets to make sure they don't lose access, and be charged for the privilege.

That might mean exploring other economic models for running chains than the standard "pay-as-you-go" approach of transaction fees, though it doesn't have to. DeFi dApps might continue to use conventional transaction fees, but charge them in the currency or currencies being used in the dApp and convert them seamlessly to gas tokens on the fly.

Other approaches include SKALE's default of enabling developers to pre-fund dApp-specific chains. Once bootstrapped, to avoid centralization, these might be paid for out of dApp fees, with a percentage of total revenues going towards maintaining the blockchain. In the SKALEVERSE, that could mean a DeFi dApp taking a percentage of fees, and converting them to SKL using apps like Metaport and Ruby to pay validators.

For non-financial dApps, where users can't be expected to pay per on-chain transaction, there are other options, including having certain types of transactions incur costs (small bridging fees, commission fees on NFT sales, premium features, etc), which are used to subsidize the chain; harvesting a percentage of fees from public service-type dApps like oracles; or even using conventional revenue generators such as advertising to pay for the infrastructure everyone uses.

The possibilities are endless. What is important is that we move away from the current cookie-cutter model of every transaction of every type incurring an up-front cost to the user, and give project founders and communities greater flexibility.

‍These features are a sine qua non of widespread adoption of a meaningful version of Web3 (i.e. one that is not really Web2.5 masquerading as Web3), but there aren't many good options in the blockchain space. Barely a handful of projects have explored decentralized on-chain storage, which must be one of the foundations of Web3. For those platforms that have implemented storage, it's generally not well integrated with other on-chain features, and/or is unnecessarily complex to use. With SKALE, it's built right into the core functionality of the network and can be accessed with just a few lines of code.

Secondly, while there have been extensive efforts to reduce gas costs via different L1 and L2 platforms, few projects have questioned the underlying premise of per-transaction fees, instead taking the necessary but unimaginative approach of optimizing the existing model rather than coming up with something radically different. SKALE's zero-gas model enables a completely different UX.

Along with increased scalability, these features hold out the prospect of a truly decentralized, all-encompassing version of the web that lives up to the promises the blockchain sector has been making since its inception, without compromising the familiar and smooth user experience that Web2 has spent 20 years honing.

For more information go to the Ruby Website & Ruby Blog