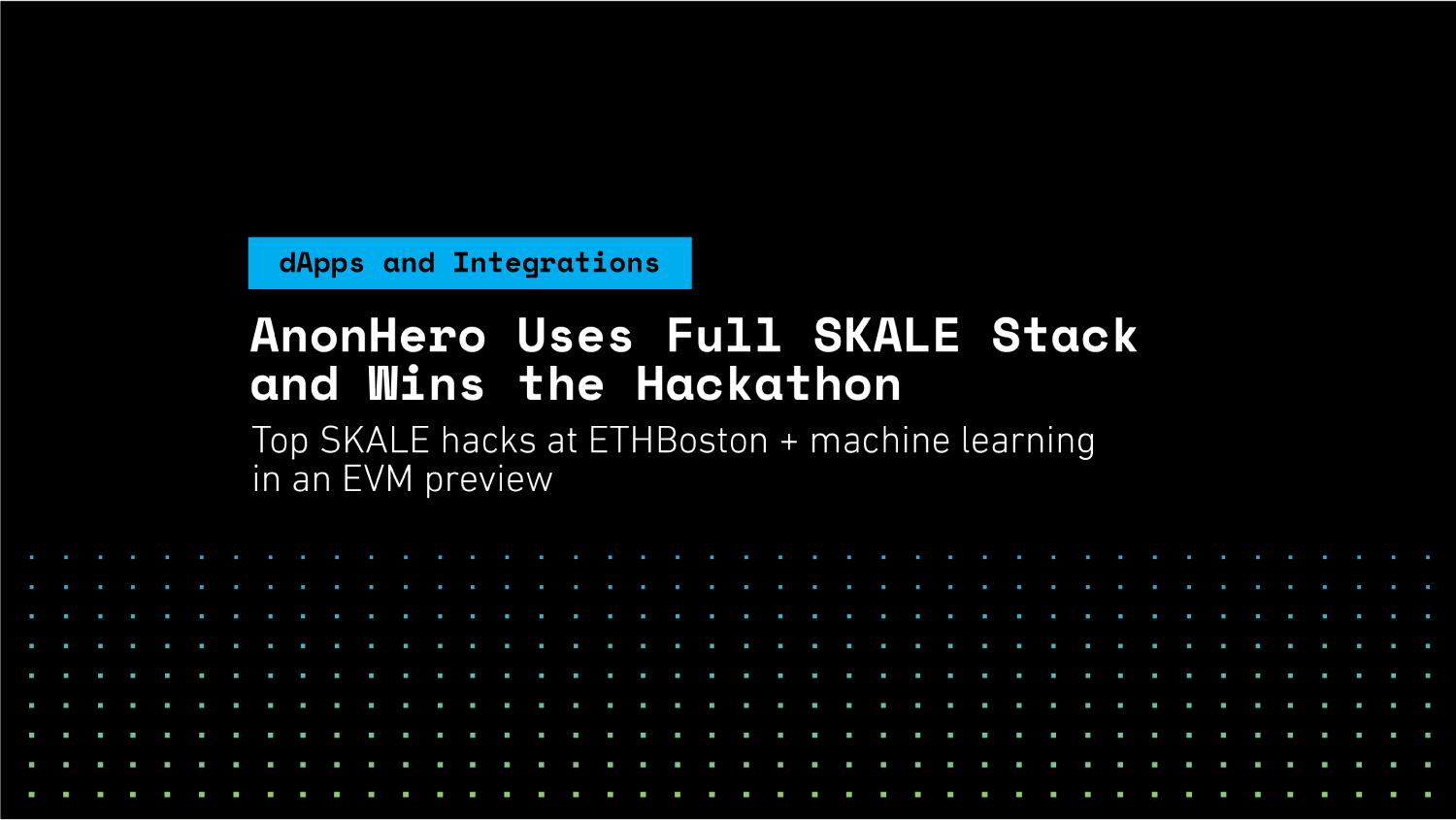 Warmest congratulations to the AnonHero team! They used the entire SKALE stack for their dApp and won the ETHBoston hackathon.

In addition to the 32 submissions SKALE has received from four of the biggest Ethereum hackathons earlier this year to become one of the most utilized technologies by hackers, ETHBoston just added another 8 new hacks. More impressively, the scope in which projects use SKALE for their tech development is also expanding.

ETHBerlin late last August saw smart contract-powered video chat streaming; now, only a little more than a week later, ETHBoston demonstrates that machine learning can also be run in a smart contract. What was previously impossible with blockchain is now made possible with SKALE.

The other submissions include gaming and DeFi dApps and privacy tools, and they were no less exciting!

The top six hacks to either deploy to SKALE or use the SKALE decentralized stack were eligible to receive prizes. The best two earned $1000 and four more won $500 each. We are proud to showcase what were built on SKALE at Harvard for ETHBoston.

Nowadays, with all the censorship, deliberate misinformation and/or just simple propensity to troll and share “fake news,” you can barely trust most public information. When someone says something happened or is happening, it is healthy to receive it, at least at first, with a certain degree of skepticism until it gets corroborated by preferably multiple other sources.

AnonHero allows users to share stories of their participation in real events and unequivocally prove it on the blockchain, while at the same time protecting their identity. This can, for example, rally supporters to stand behind ongoing events, like demonstrations, without endangering the user.

AnonHero has made great use of a wide range of SKALE technological innovations like the modified EVM, SKALE storage and new ML features. This is the first successfully submitted dApp implementation to employ machine learning in a smart contract, and it happens on SKALE.

As an events platform, AnonHero has the potential to impact the most socially relevant areas of society like professional and social media, activism, entertainment, social services, police investigation, etc. It truly deserves the top prize of $1000.

Fantasy football makes touchdown on the blockchain with Fantethy Football. Users can draft, view, and follow the players in their league. SKALE considerably speeds up the network bandwidth — an issue the hacker team needed to address when initially deploying to Ropsten.

The polished demo earned its spot as a co-top winner also bagging a $1000 prize.

Thank you, Devon Yarbrough and Olivia Gordon for pushing the use of blockchain in gaming applications!

Borrowing and lending platforms are typically focused on the time-bound exchange of principal for accruing interest, both usually denominated in currencies (and now also cryptocurrencies). Meanwhile, almost all of us forget that we are keeping significant value in accumulated items many of which are stashed away and idling in storage. Their value could have circulated more freely in society if only we could trust other people with our suit or dress, bag or jewelry, or even appliances and electronics, and other personal belongings, as easily as we would perhaps trust a friend or relative to borrow them. Everyone involved could have benefited from deriving more usage from plenty of otherwise seldom or rarely used items. Stakeable envisions a decentralized goods sharing economy that will make this possible.

Stakeable will empower lenders and borrowers to create their own agreements secured by decentralized escrow and without any middleman. People would be more willing to lend out their belongings if a P2P agreed upon value in crypto assets is placed in escrow by the borrower to cover the potential loss or damage to the goods. Borrowers, on the other hand, would feel more at ease in knowing that the assets in escrow (minus any arranged daily fee, if there’s any) can be trustlessly redeemable after the return of the borrowed items.

Over time, a decentralized goods sharing economy would evolve its own competitive markets that can independently price in and appropriately set the lending and borrowing value of even depreciating assets, for example, breakables.

Thank you, David Kenahan, Brent Lagerman and DJ Rosenbaum for thinking up ways to open up value in new creative ways!

Able Coins is a mobile application on Fitbit or Apple Watch for the elderly to use when shopping. Able Coins team member Jill, whose mother is in healthcare, was inspired to create this payment app on blockchain, with a simple and intuitive UI specifically designed for ease-of-use.

They used SKALE to achieve instant finality and fast transactions.

MixETH allows ETH to be moved between addresses in an untraceable manner by first mixing together the coins of different users. This can help keep one’s transaction history private, and privacy is a necessary component of fungibility, which in turn is an essential property of currency. MixETH uses zk-SNARKs verification, SKALE’s decentralized storage, and other web3 technologies. It is already deployed on the Kovan Test Network.

Thank you, Roman Storm, Arsenii Pechenkin, Roman Semenov and Alex Lebed for coming up with a working privacy solution for Ethereum!

Another anonymity and privacy tool enters and rounds up our winning circle. ZeroPool is an experimental project that also utilizes zero-knowledge proofs in a smart contract for its anonymous multi-asset pool. It is not a mixer, however, and hence is strongly suited for storing and supporting atomic swaps between different kinds of assets. Information on the types and value of the assets in the pool remain encrypted and are inaccessible to outside observers. Therefore, all transfers and atomic swaps remain completely private.

Thank you to everyone who has started using SKALE for their development needs!

SKALE is among the sponsors of the Ethereal Blocks virtual hackathon, where we have also set aside prizes including a trip and ticket to Devcon 5 in Osaka, Japan. We can’t wait to announce the winning dApps at Ethereal Blocks! The hackathon serves as a forerunner to the Ethereal Summit in Tel Aviv, where SKALE CTO and Co-Founder Stan Kladko is scheduled to speak on September 15.

In the coming weeks, SKALE will also go to China for the Shanghai International Blockchain Week; to Korea for the Korea Blockchain Week and the PoS Protocols and Validators Meetup; and, of course, to Japan for Devcon 5. Come see us if you’re in town!

See you at these events!