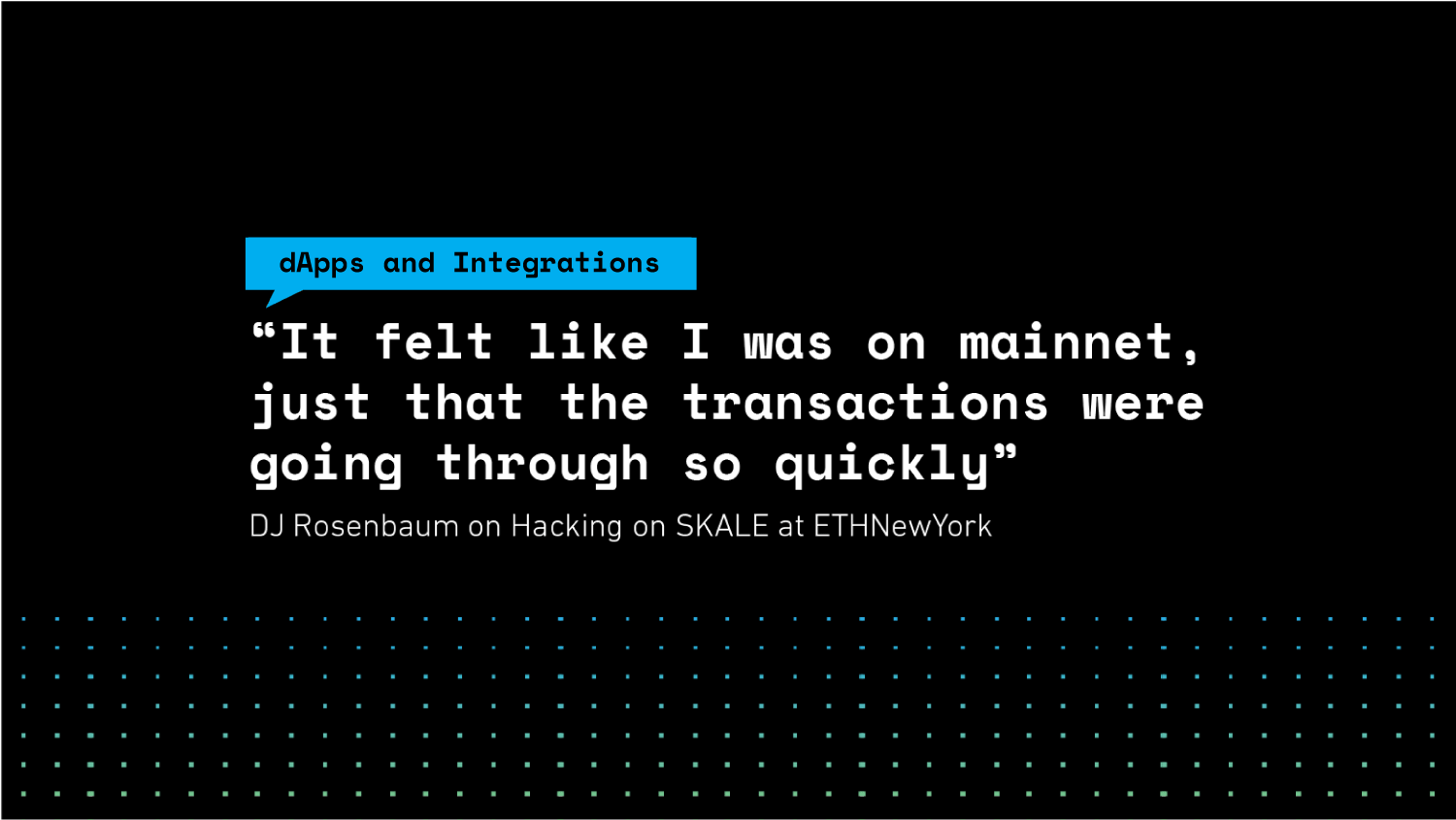 This week we had the opportunity to chat with DJ Rosenbaum about winning his first hackathon at ETHNewYork with his team’s decentralized game submission, Collusion.

DJ’s story of getting involved in Ethereum is all too familiar. Working as a software engineer in New York, you can imagine that it’d be nigh impossible for him to avoid the buzz of cryptocurrency in the halls of workplaces. And eventually, after doing his own research, he decided to invest in both Bitcoin and Ethereum. But it didn’t stop there — DJ was captivated by smart contracts and went further down the rabbit hole.

“There’s just so much to the system — from the usage of gas for processing to the utilization of this network of nodes for security and verification, all the pieces combined are really, really impressive.”

So, when he heard about the upcoming hackathon in New York, DJ knew it as a great opportunity to show off some of his dApp development skills and go even deeper on some of the related technologies. And while it may have been his first Ethereum hackathon, DJ had no issues in assembling a team of four (Jacob Shiach, Brent Lagerman, Devavrat Kalam, and himself) to create a decentralized game inspired by Vitalik’s opening ceremony speech covering cooperative game theory.

With a rough idea in hand, the team then proceeded to sketch out a “Capture the Flag” style board game. In this game, players work with or against one another to make it to the center of the board — the first player to do so is declared the winner and rewarded an NFT prize. For more on the mechanics of the game, check out their submission!

Well aware of the fact that dApps on the main chain don’t provide for great usability, the team proceeded to a few sponsor workshops to try out some layer two solutions. To their disappointment, they were unable to get setup with State Channels as the workshop’s Hello World demo was throwing an error for everyone. But then, they found SKALE.

“I attended SKALE’s workshop and was super impressed with how fast the transactions were. I thought could be a very exciting prospect — a turn-based game with every turn being a transaction.”

DJ and the team requested a sidechain from the SKALE team, got some testnet ETH from the faucet, deployed some test contracts, and then connected to the contracts with web3.js and Metamask.

“After my first transaction, I thought it was broken because it went through so quickly. That’s when I thought to myself , ‘This is the right tech to use…’”

From there, they just kind of ran with it — looking at the transactions on the block explorer and building out the game. Unfortunately, hackathons are short; while the team was able to get the foundation for the game completed, they simply didn’t have enough time to finish building everything. And even though the team may not have finished everything, their efforts were recognized and rewarded with a 1,000 DAI bounty from SKALE!

After the event, DJ talked to a few of the teammates who were interested in continuing development of the game to see it through. And with this game and beyond, they now know that they can leverage SKALE on Ethereum to easily create decentralized games that are both fast, easy to use, and free for users.

This having been his first Ethereum event, DJ’s opinions relating to the nascency of this space were hardened — with the main sticking point being that of network congestion and a need for scalability. But he thinks that SKALE is well on its way to solving that issue with layer two and reinforced that opinion with his experience of using sidechains:

“It felt like I was on mainnet, just that the transactions were going through so quickly.”

If this article resonated with you and you’d like to try SKALE out, make sure to join the SKALE community on Discord and check out the Developer Documentation! Also, feel free to also check out SKALE’s Technical Overview and Consensus Overview for a deeper dive into how SKALE works and is able to provide 20,000 TPS.

SKALE’s mission is to make it quick and easy to set up a cost-effective, high-performance sidechain that runs full-state smart contracts. We aim to deliver a performant experience to developers that offers speed and functionality without giving up security or decentralization. Follow us here on Telegram, Twitter, and sign up for updates via this form on the SKALE website.