Building in Bear or Bull 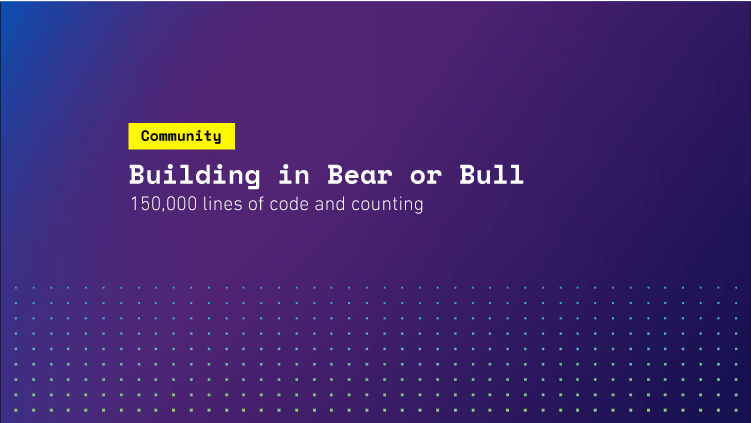 While our sense of how the market is doing is driven by price, a much better and more fundamental metric is how the technology and infrastructure is developing.

Last December, at our team's final all-hands of 2018, we made sure to do a retrospective on the state of the crypto markets and industry as a whole.

In stark contract to the peak (in retrospect irrational) or exuberance where we left off in 2017, 2018 ended with the prices of most projects down over 90% from their all time highs. In many parts of the community, this was noted in frustration, with the feeling of being at the precipice of a new decentralized digital world being replaced by questions of whether anything being built was actually going to find market fit.

This perspective demonstrates just how easy it is to let prices drive our sense of the market. This is equally true at the bottom and the top.

At the same time, however, cryptoassets are something of a unique phenomena. Because they are characterized by open, public market dynamics from their very inception, short term speculative markets can spin up around them that are almost entirely divorced from real long term fundamentals. Both the rise and crash of the 2017–2018 boom were less about state of decentralized tech, and more about the combination of excitement about the emergence of a new paradigm and the ability to trade against that excitement.

One of the main reasons why we included the retrospective was to reframe our perspectives on progress. Instead of looking towards the irrational markets, I suggested that my team focus on fundamentals and how real technology infrastructure were developing. And when viewed in this light, there is no way not to see the last year as immense progress.

In a recent essay for Business Insider, one of SKALE’s investors, Kyle Samani (Multicoin Capital), discussed just how much institutional infrastructure had been built around crypto assets in the last year with the bulk focused on Decentralized Finance. What he was alluding to was the fact that even in the bear market, builders were preparing the ground for the next generation of investors — including the biggest institutions.

And we see the same occurring in the realm of infrastructure, middleware and tooling necessary to build truly powerful decentralized applications. Over the last year, we’ve seen the emergence of autonomous games, prediction markets (as well as interfaces and experiences that sit atop those markets), decentralized exchange infrastructure, decentralized finance applications, and much, much more. If the mantra of 'Innovate or Die' holds true, then this space is more alive than ever!

And with winter beginning to thaw, I'm certain that we're going to see a resurgence of interest in blockchain technology. One that will be met with much more promise and infrastructure than the last bull market.

And with this newfound excitement, it will be even more important to not get distracted but instead double down and continue building to meet that new demand.

If you have not recently taken a step back, I highly encourage it. I believe it is important to regularly ground ourselves with a reminder of our purpose so as to not get swept up in all of the noise.

We started SKALE because we believe that the centralized internet paradigm of Web 2.0 no longer serves the majority of people. Too much control rests in the hands of a small handful of companies who wield network effects more powerful than the world has ever seen. And we now have the technology available to change that fact.

We started SKALE because we believe that there is unprecedented room for innovation in the programming of value - we've barely scratched the surface of self-organizing markets, permissionless multi-sided value networks, and so much more.

The future we’re excited about is one in which new types of incentive models inspire new business models and even new ways of thinking about human organization; and where developers imagining a different future actually have the tools to bring those ideas to market.

That’s the future I’m proud our team is working so hard to enable. Every one of the more than 150,000 lines of code we’ve pushed is ultimately an affirmation of this key point: whether the crypto market is bear or bull, what matters is the build.