Key Strategies for Dapps to Reach the First 10,000 Users 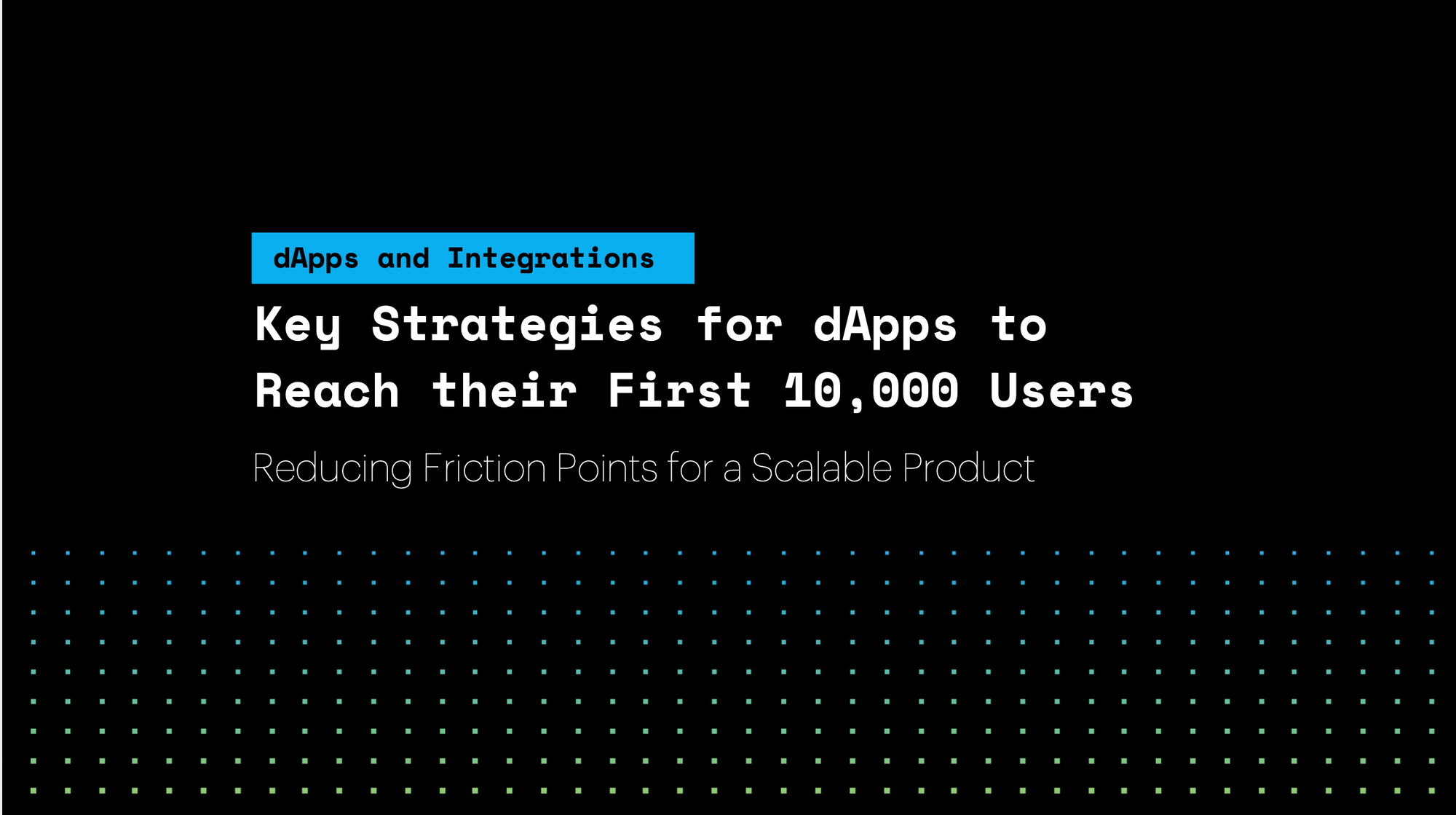 This tackles head on the question that’s been left nagging in everyone’s mind — “where’s the user adoption?” For years now, there’s been talk of waiting for blockchain’s ‘killer app.’ There’s less talk of it now; there’s just more waiting.

Christine started her presentation by recounting how when she was first thinking of getting into blockchain and building applications, and as ConsenSys Academy helped her understand the landscape better, she became all the more aware of all the friction points that both dApp developers and end users face. Understanding what she’s up against, Christine actually decided at that time to not get into blockchain-related development yet, and maybe wait another 2 to 3 years for the industry to mature first. Fortunately, she ended up meeting Jack O'Holleran later that summer. Through her activities at SKALE, she has since met a plethora of people building blockchain solutions across so many different environments and verticals — from the obvious ones like gaming and finance to unexpected ones like the wine industry — and she has been working with them in addressing the friction points and helping them understand how they can scale their dApps to fuel user growth.

There’s no shortage of blockchain scalability problems, but in her presentation, Christine specifically focused on those related to the UX, Infrastructure, and Community.

User growth starts at user onboarding — that is, it all starts with getting people to register to use the application. The mainstream onboarding flow of current everyday applications is frictionless. Users typically register with just an email address and a password of their choice, and then they already have an account and can use the application at will.

For blockchain applications, the onboarding process is a lot more convoluted. Users now need to understand how wallets work, how to connect their wallet to applications, how to send transactions, etc. Suddenly, would-be users encounter a lot more friction even at the very first step of simply signing up. So unsurprisingly, oftentimes, they just don’t.

When decentralized applications do get some users registered, dApp developers would still need to keep winning them over with great user experience in order to retain them. One important way to do this is to ensure that user access to the product or service offered by the application is fast, or at least as fast as what they have already come to expect from modern apps. Currently, that’s not the case in blockchain. So dApps end up without any choice but to unreasonably ask their end users to be extra patient and wait longer than they are used to every time the application interacts with the blockchain.

Not only are users made to wait but they are also charged a minor fee in gas cost every time the dApp utilizes the blockchain. For example, they might be prompted to pay just to log in, and pay again just to store data, and yet again just to view that data. All of that ends up adding up to a really negative user experience that does not lend itself to user retention, much less user growth.

Outside of user experience, there is also an infrastructure problem, where dApp developers would want to make sure that they are building an application that really plays to privacy and security, does decentralized storage, and is interoperable with other blockchain projects. End users, on the other hand, would expect that their privacy and security are upheld, at least as much as if not more so than they would be in any other application.

Another critical aspect, that may not look like it fits within scalability but it does, is community. In the blockchain space, there is a huge emphasis on building a community. As developers create new applications for blockchain, projects can attract more users by creating content and sharing lessons learned, forming partnerships and expanding the ecosystem, making it easier for future developers by participating in the wider open source community, and being active on social media.

Christine would not dwell as much on community as she would on the first two friction points: UX and infrastructure. A key takeaway here moving on with her presentation is on how important partnerships are.

SKALE and Partners: As infrastructure and on UX

Talking about how SKALE can support and scale dApps towards their first 10,000 users essentially brings us back to what SKALE is. The SKALE Network is a Layer 2 solution on Ethereum that allows dApps to enjoy high-throughput and low-latency transactions on their own, albeit connected, elastic sidechain.

dApps pay in a subscription model to access a share of SKALE network resources by deploying and renting a chain. The end users would then no longer have to worry about incurring transaction fees at each instance of blockchain interaction while using the application.

The SKALE Network offers a lot more than low-cost, high TPS chains for dApps that are each as secure and decentralized as Layer 1 and able to execute full-state smart contracts. SKALE also provides file storage, privacy, and, in the future, even the ability to run machine learning, among others. So while you can already store a trained ML model on SKALE, in the future, developers can use the trained model and actually run predictions, analytics or data filtering on their sidechain. All of this is built on top of Ethereum and is fully interoperable with the ecosystem, so that dApps can choose to interact with both SKALE and Ethereum. So, for example, a dApp that manages ERC tokens can be powered by SKALE to make such transactions faster and with zero gas fees for the end user.

Leveraging existing SKALE partnerships and integrations like with Fortmatic and API-based wallets, Bitski and Portis, dApps deployed to SKALE can arrange for easy authentication and key management for their users, similar or comparable to the onboarding flow of mainstream apps.

SKALE enjoys more partnerships and integrations that go beyond onboarding flow, including those that provide oracles and on-chain analytics. The space has gone a long way and there are now different projects tackling many of the identified friction points affecting blockchain application development agility and user adoption. SKALE understands that by working together, it advances the industry so much faster. SKALE will continue to work with other projects to bring in resources, capabilities, and interoperability to dApps deploying to the SKALE Network.

Developers can scale their smart contracts and dApps with SKALE. With SKALE’s partners, they can power their dApps to go a lot further.

The state of user experience, infrastructure, and community are now at the cusp where you can soon effectively grow your application to 10,000 users and beyond. Yours could very well be the first ‘killer dApp.’

Learn more about SKALE by visiting our website and going to the developer portal, checking out our code on GitHub, and following us on Twitter, Telegram and Discord.

Christine Perry also encourages you to check out ConsenSys Academy, which helped her break into the blockchain scene.

You can watch a recording of Christine’s Ethereal Summit presentation on YouTube.