SKALING UP: An Even More Modular and Open SKALE Network 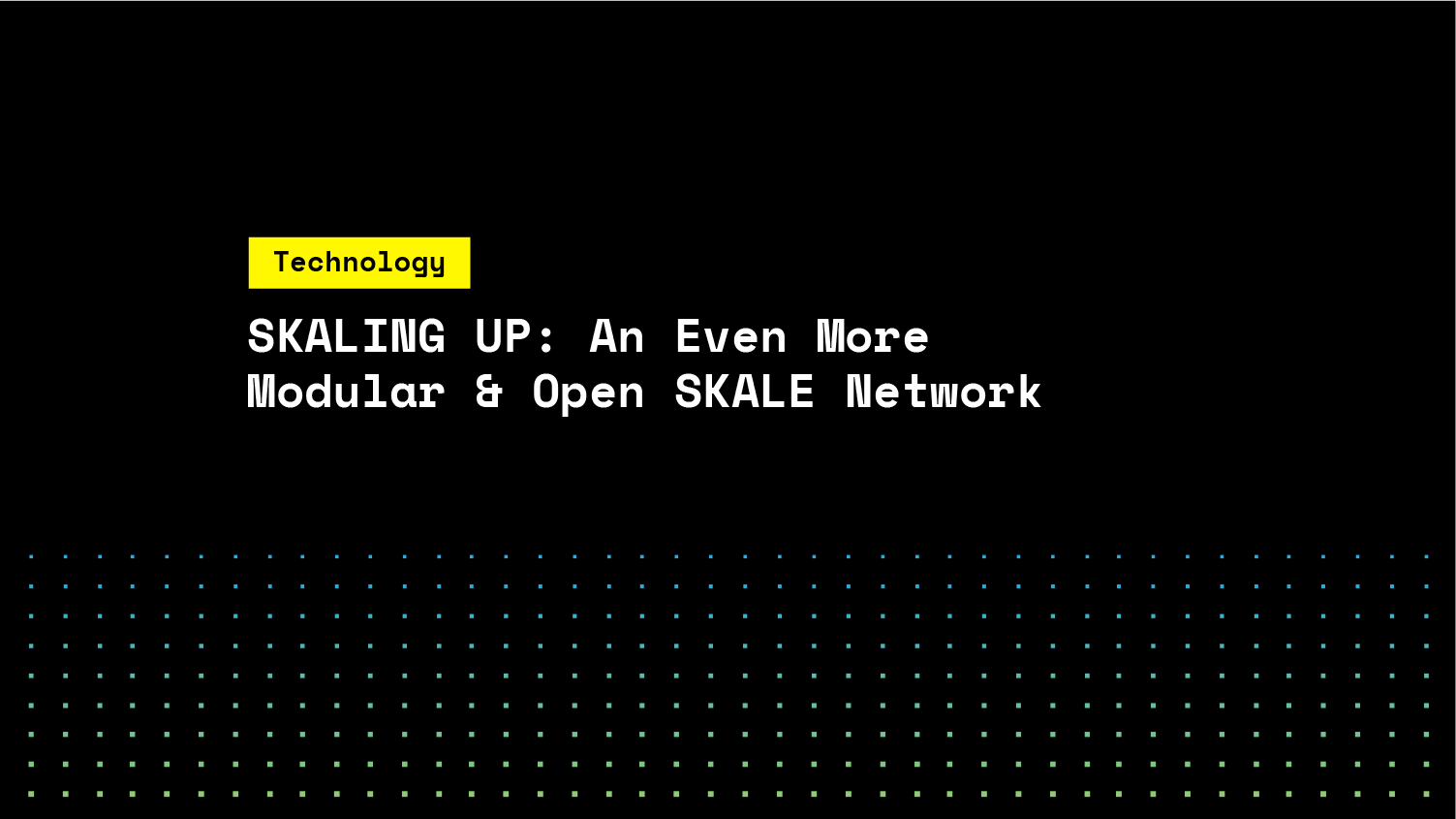 After a few more weeks of TestNet the SKALE Validator Community will soon be rolling out the SKALE Chain upgrade soon after the Ethereum Mainnet Berlin Hard Fork, which is scheduled for block 12,440,00, expected to happen April 14th, 2021. For many obvious reasons, the validator community and SKALE dev community have chosen to upgrade following the fork rather than before.

This upgrade is comprised of many critical and strategic updates. The upgrade also takes SKALE to the next phase in the architecture of the SKALE Network as it relates to both upgrades and interoperability, adding rocket fuel to network growth.

First let’s take a look at how successful technology platform ecosystems develop. They start with a core technology that is highly valuable and highly differentiated. This core is a center of gravity for an ecosystem. They then focus on maintaining and improving their core while putting efforts toward making it easier for partners to build contextual components and modules.

A great example from SaaS is Salesforce.com. They created a cloud CRM database that was very good at a few basic, but very critically important functions. At its core it is a customer records database which is the nucleus of the cloud sales and marketing landscape. Rather than creating an ecosystem of supporting tools and services, they opened up the platform and let other companies build the additional features, applications, and services. In doing so they lost the opportunity to capture short term revenue for Marketing, Analytics, Order Management, Billing, etc. What they gained was a massive platform of companies creating highly valuable software and services which made the core, force.com, even more valuable. By owning less of the horizontal functionality, they ended up owning even more market share by growing the pie.

As a reminder, SKALE is Ethereum Native (more on that point here). This means SKALE is orchestrated and managed in large part by the Ethereum Network and a bulk of operations functionality is on Ethereum. SKALE is also multi-blockchain. It is not a network of just one EVM blockchain (and it is NOT a sidechain), but many EVM blockchains that are fast, secure, and interoperable with the Ethereum Network. These blockchains are application specific, meaning each app has its own proprietary blockchain. These app specific blockchains are called SKALE Chains. SKALE Chains are the nucleus of the SKALE Ecosystem.

I’m now going to describe the phased evolution of the SKALE Network.

The SKALE Vision has always been about creating a world of highly configurable, interoperable blockchains. However, when building a decentralized network the technology must evolve in phases.

The first phase of SKALE Chains combined the SKALE Blockchain, the SKALE IMA Bridge, SKALE File Storage, SKALE ML, and SKALE RollUps into one offering. In this view of the world, SKALE Chains were a package that came with a pre-built bridge and other services that performed specific functions. Non-native services could be run on SKALE but would do so as work-arounds to native chain services, i.e., any bridge could be run on SKALE, but the focus was on the SKALE IMA Bridge. This was beneficial as each SKALE chain came fully loaded with features and functionality. The downside of this approach is that when SKALE Chains are seen as a unified set of features it fights against certain core design patterns, namely modularity, flexibility, and configuration options. This tight binding can also have negative impact in terms of upgrades of specific services and can hinder interoperability with other solutions, thereby limiting growth into certain sector-specific markets.

Again, this phase was a step in the path of getting to the end goal of a global web of interconnected Ethereum Blockchains.

As the SKALE Network progressed to Phase 2, it evolved to this interim state:

The difference in Phase 2 is that SKALE Chains would be seen as being independent of Chain Services, such as bridging, rollups/centralized verification checking software, file storage, Machine Learning features, etc. Not only would Chain Services be seen as independent, but engineering effort has been put into making them interchangeable and upgradeable. An example use case is that a DEX could integrate the IMA Bridge. Let’s imagine a DeFi specific Bridge becomes the de facto choice for the Ethereum Defi community and all EVM blockchains. At this point the DEX could easily replace IMA with the DeFi specific bridge without losing any state or having any meaningful downtime on their chain. The same upgrade path would hold true for roll ups, ML, File Storage, Oracles, etc. The limiting aspect of this phase is that more focus was put on ease of integration for SKALE native services, rather than focusing on making all Ethereum ecosystem services easily integrated and upgraded. While this phase was a necessary stepping stone, it was clear that Phase 3 was needed to push closer to the end goal.

Here is a look at the future of the SKALE Ecosystem, where a world of Ethereum Native, app-specific blockchains drive value across a vast array of applications and industries. Engineering effort to create better ecosystem cohesiveness with upgradeability, interoperability, and backwards compatibility means easier plug and play integration with SKALE Chains.

This world puts SKALE Chains in the nucleus of the offering while opening up in an embracing manner to the Ethereum developer ecosystem. To make this a reality, the SKALE dev community will take a neutral position on which services have priority. Effort will be taken to actively promote a number of services rather than promote “home grown” services. This opens up the SKALE Network to an entire ecosystem of tools and makes SKALE stronger in specific areas where certain bridges, file storage, oracles, data querying/analytics, roll ups/centralized verification, and other functions have strong product market fit and support.

One key technology addition here is that if roll up technology improves, becomes generalizable and cost effective, then the various forms can easily be integrated to the SKALE Network. Also, rather than the SKALE Core Devs and Open Source Community needing to create bespoke roll up solutions, the companies that create and sell roll up software and roll up operator services can design specific integrations to the SKALE Network. I still strongly believe that Roll Ups are not needed in many environments, especially ones that require decentralization in L2. If fraud proofs/ verification software is run on a centrally run server, there is a high likelihood that the entities running the operators will be required to perform KYC/AML on the users or be in conflict with securities and AML laws of various regions. Additionally as the Proof of Stake validator ecosystem evolves there is even less need for verification checkers on top of consensus mechanisms and the complexity that comes with their use. However, being less opinionated and providing solution flexibility to various roll up options makes the SKALE Network even more modular, open, and expansive. The SKALE Network will provide app specific, gas free, high performance EVM blockchains and enable developers to design and configure their environments to their specifications.

Lastly, I want to remind everyone that the SKALE Network is a Universe of Blockchains and not just one. So the view of Phase 3 looks something like this from a macro-perspective.

Phase 3 Macro View: A look at the SKALE Multi-Blockchain Universe

Next Steps and Execution

In order to make the step to the next phase, the upcoming network upgrade will include the latest SKALE Chain functionality and will be decoupled from File Storage, IMA, and ML. Applications will be able to start using SKALE Chains and will be able to connect whichever services they prefer from whichever team, company, or network of their choice. We are still just as excited as ever about the native services in development but even more excited about widening the technical stance towards more rapid ecosystem integrations. The goal is to launch and support as many chains as possible to power Web3, Defi, and open finance, and building a flexible and extensible service structure is exactly the way to get there.