Into the SKALEVERSE: Introducing SKALE V2 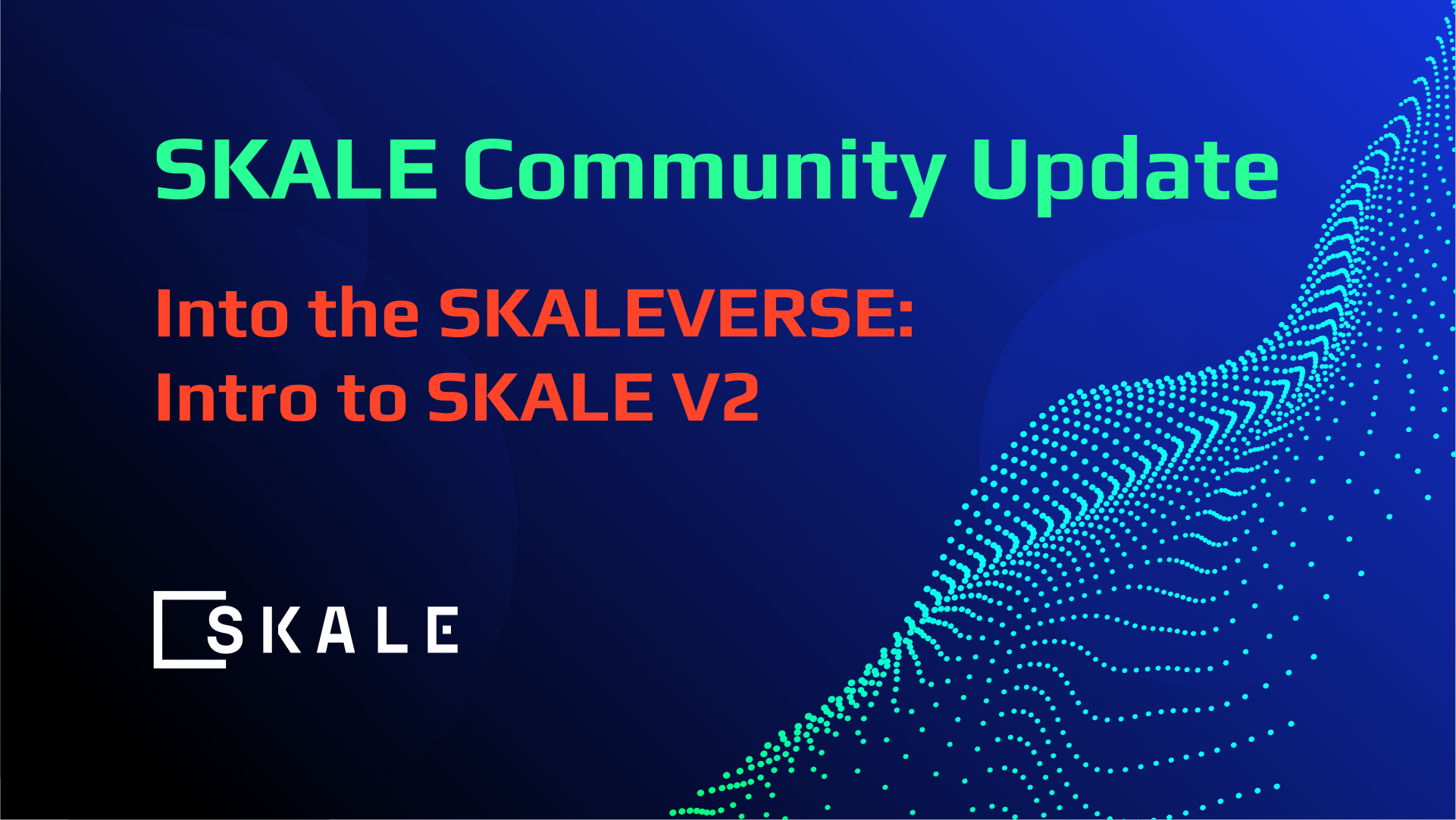 Hi all! We have exciting news to share. Another major network upgrade has now been completed and was put into code freeze last week. It will soon be released after successfully passing the QA, Audit, and TestNet gates. We are calling this release the SKALEVERSE, as it transforms the world of SKALE + Ethereum connected blockchains into a Universe of interconnected SKALE to SKALE + Ethereum blockchains.

SKALE's goal is to bring the power of Ethereum to 1 billion users. This release optimizes SKALE's ability to support booming categories like NFTs, Web3, Metaverse, and Play-2-Earn gaming. These high-growth consumer-centric categories require a phenomenal user experience at low costs and with minimal bridging friction, a core strength of the SKALE Network.

The SKALEVERSE V2 Upgrade will give the SKALE Network the user experience and dApp interoperability of monolithic Layer 1s combined with the unlimited capacity promised by a world of Roll Ups and modular Layer 1s. In essence, SKALE will have the best of both worlds, allowing end users to move easily at no cost between SKALE Chains while being capable of growth without sacrificing transaction time or performance. Each new chain increases the overall capacity of the network making the whole even greater than the sum of its parts.

In many ways, blockchains resemble the supply/demand dynamics of a rideshare platform like Uber and Lyft. Except that this scenario, supply has been severely hampered. Imagine if Uber only had 100 cars regardless of the demand. Surge pricing would help riders move to the front of the line, but without the ability to increase supply the price surges would be immense (ie - they wouldn't be able to add more drivers and so there would be no expansion of supply).

This is the scenario faced by monolithic Layer 1 blockchains. As new nodes join the network, supply is not increased. Instead security increases but performance decreases as more nodes must come to consensus on the same chain which increases latency. Basically you'll wait an hour or more for a $500 uber ride that takes you a few blocks.

Conversely, a multichain blockchain network like SKALE is able to continually increase supply to meet demand. As new nodes join the network they are able to add compute supply to a pool that creates new chains. Surge pricing only impacts the price of chains rather than transaction costs which in turn incentives validator operators to set up more chains. This mechanic allows the network to grow to meet demand.

One potential issue with many separate blockchain databases is interoperability and composability. Many rollup naysayers call out the disconnected user experience brought forth by many disconnected databases as a major flaw in comparison to L1 Eth Killers. For example, a user must continue to hop between each rollup and the mainnet every time the user wishes to use their token on another application. Each bridging event takes time and most importantly gas fees. Supply is not constrained, but access to the supply is gated by fees and UX challenges. SKALEVERSE V2 solves this issue.

SKALE's current version enables chains to bridge to the Ethereum mainnet in a very fast and cost effective manner, putting SKALE at parity with other blockchain networks and rollup solutions. As a next step in the planned evolution, SKALE Chains will be able to bridge and speak to other SKALE Chains. This interconnectedness is a game changing upgrade that puts SKALE in a league of its own in terms of technical features and will be live with the rollout of V2.

For example, if a user earns tokens playing a P2E game and they would like to swap those tokens into a stable coin, they can simply connect to a DEX on SKALE to swap their tokens. This transfer can happen in less than 10 seconds with zero cost to the user. That user can then take the Stable tokens over to a Metaverse product where they can purchase an Avatar (NFT). If at a later date they want to sell the Avatar, they can quickly and easily connect to an NFT marketplace SKALE Chain and sell it on the open market.

The user can hop from chain to chain in the SKALE Network in seconds at no cost. In addition, each application running on SKALE will be encouraged to use the same bridging UI / Widget which will create a unified learning curve and experience across the entire network.

SKALE Chain to SKALE Chain transfers enable a smooth user experience across the entire network while ensuring the network is not overloaded.

Another major component of this release will be the introduction of SKALE Hubs. Having a vast universe of interoperable blockchains is powerful, but it also can cause friction for partner services such as Oracles, GraphQL, NFT Marketplaces, liquidity providers, and more. SKALE will help partner services integrate in an efficient manner by creating Hubs. Hubs provide critical ecosystem services to dApps running in the SKALE Network.

For example, there will be a few primary Decentralized Exchange Hubs in the network and a few primary NFT Marketplace hubs. This enables partners to focus their integration efforts on a handful of chains rather than needing to provide support across the entire universe of chains.

Chainlink and the Graph for example, can connect quickly and easily to just a few DEX hubs where they provide the most immediate value. They can selectively choose other dApp Chains to integrate to as they see fit. This is just a teaser, keep your eyes open for a deeper dive on SKALE Hubs which will be released very soon.

Get ready for a better connected world without a lot of traffic delays and bridge tolls.

The SKALEVERSE release includes a number of other highly requested features from the SKALE Developer Community. Here is a summary of the upgrade:

SKALE Chain to SKALE Chain Transfer - This allows all chains in the SKALE Network to communicate for free and in seconds with other chains.

Advanced Multisig Capabilities - This feature enables greater security and more sophisticated decentralized control of SKALE Chains. Any organization - a fully decentralized anon DAO or a highly centralized Fortune 100 company can administer a SKALE Chain in the manner that fits their requirements.

Speed Game Mode (SGM) - This feature does exactly what it says it lets games run fast using advanced transaction batching. Games will be a major area for SKALE growth in 2022. SGM will play a critical role.

Random Number Generator Precompile (RNG) - This feature provides a RNG endpoint to each SKALE Chain. Getting a random number on the blockchain has been historically difficult. With this precompile, developers have access to random number generation based on SKALE's BLS threshold signature technology. This source of randomness is difficult to bias and is suitable for a variety of applications including gaming and lotteries.

Threshold Encryption - This feature resolves front-running and MEV attacks by encrypting transactions sent to a SKALE Chain. No one will be able to decrypt those transactions in the transaction queue, and transactions are decrypted only when appended to the chain. Read more.

Please stay tuned for more details and specific timelines regarding the release. The QA effort is up and running at full speed. We hope to see the release candidate move quickly to TestNet and then Mainnet. 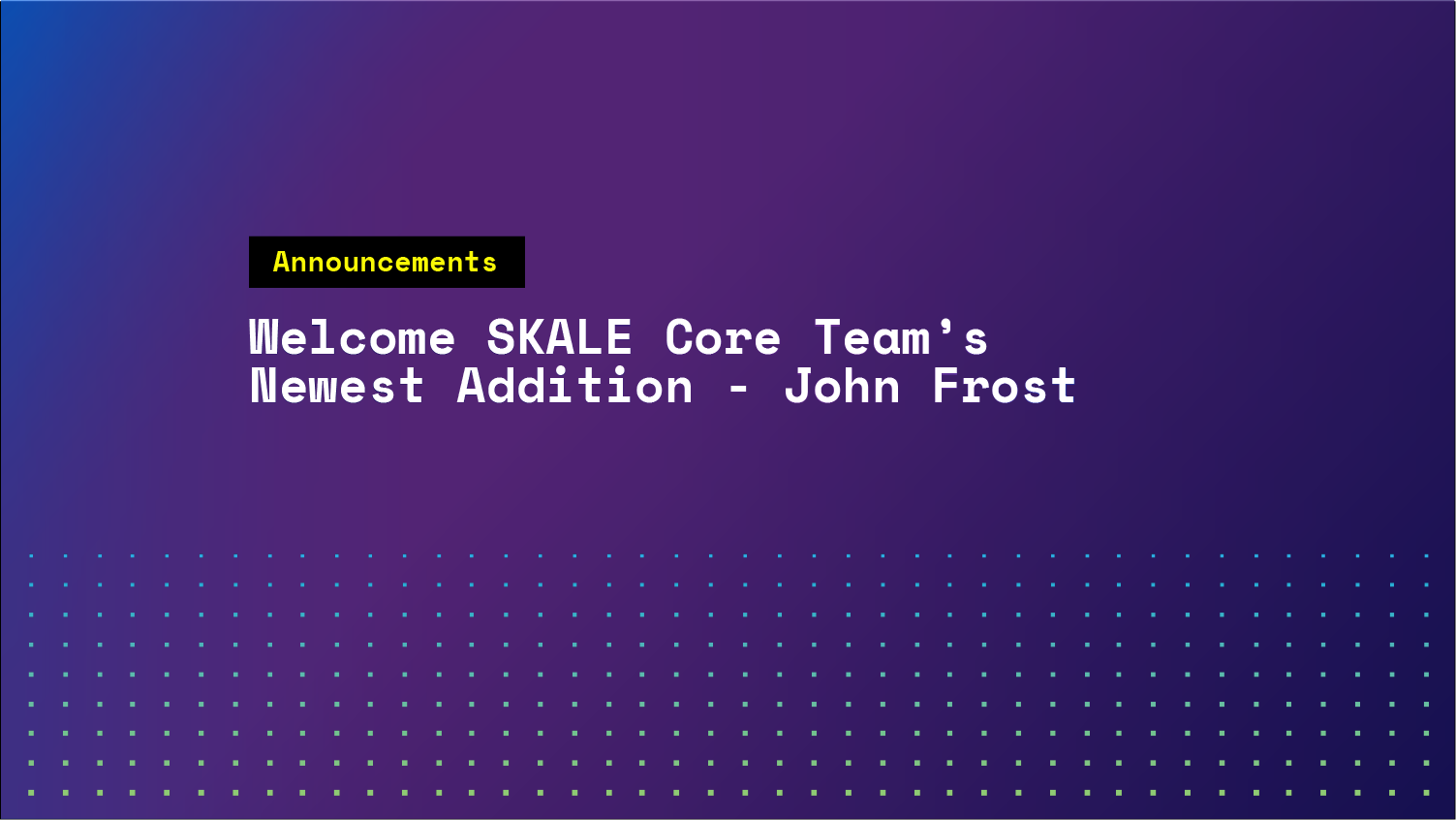 Originally from Australia, John started and worked with numerous startups in Melbourne, Stockholm and San Francisco. We're incredibly excited for him to hit the ground running as part of the Solutions Engineering team at SKALE Labs. 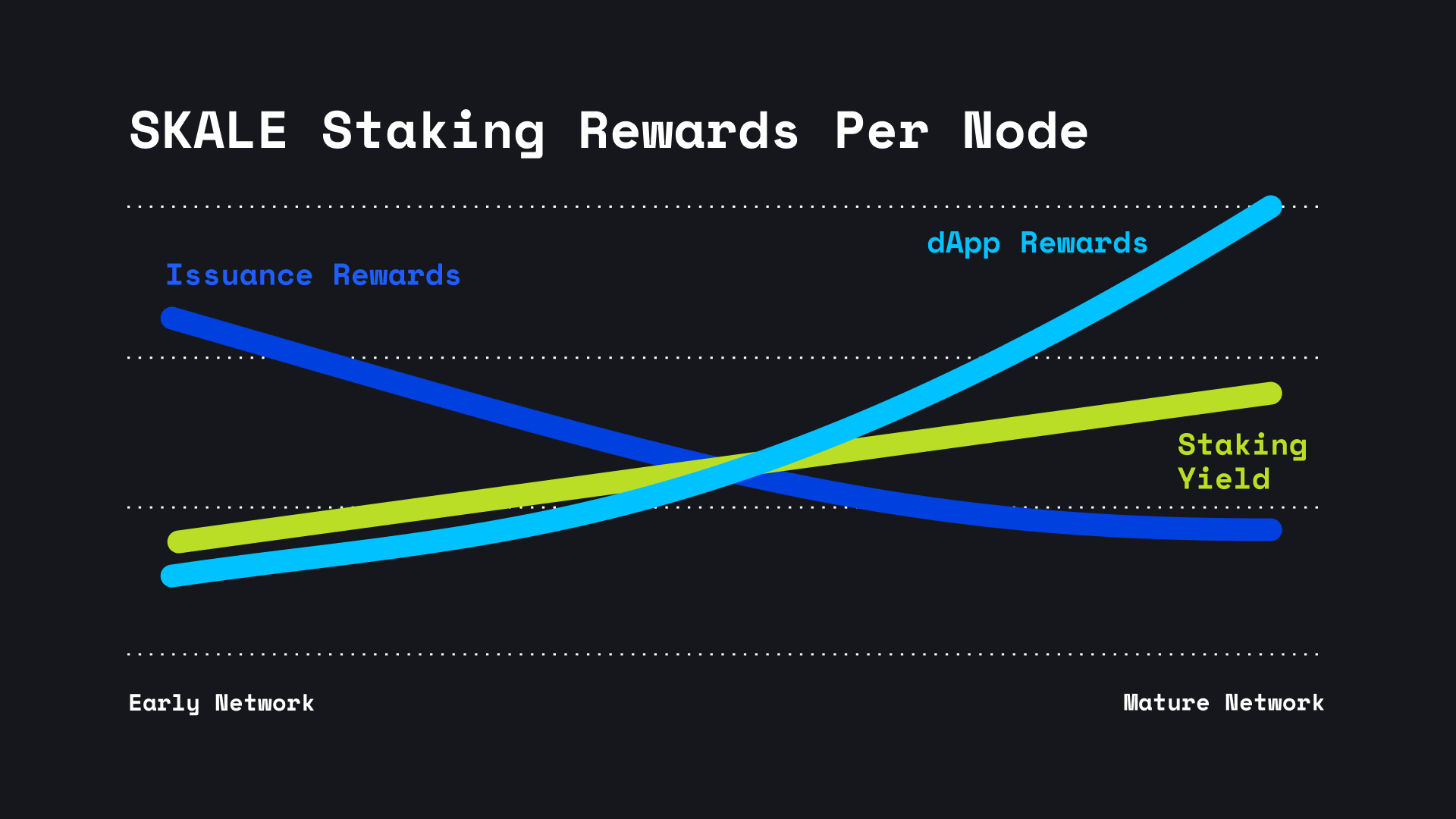 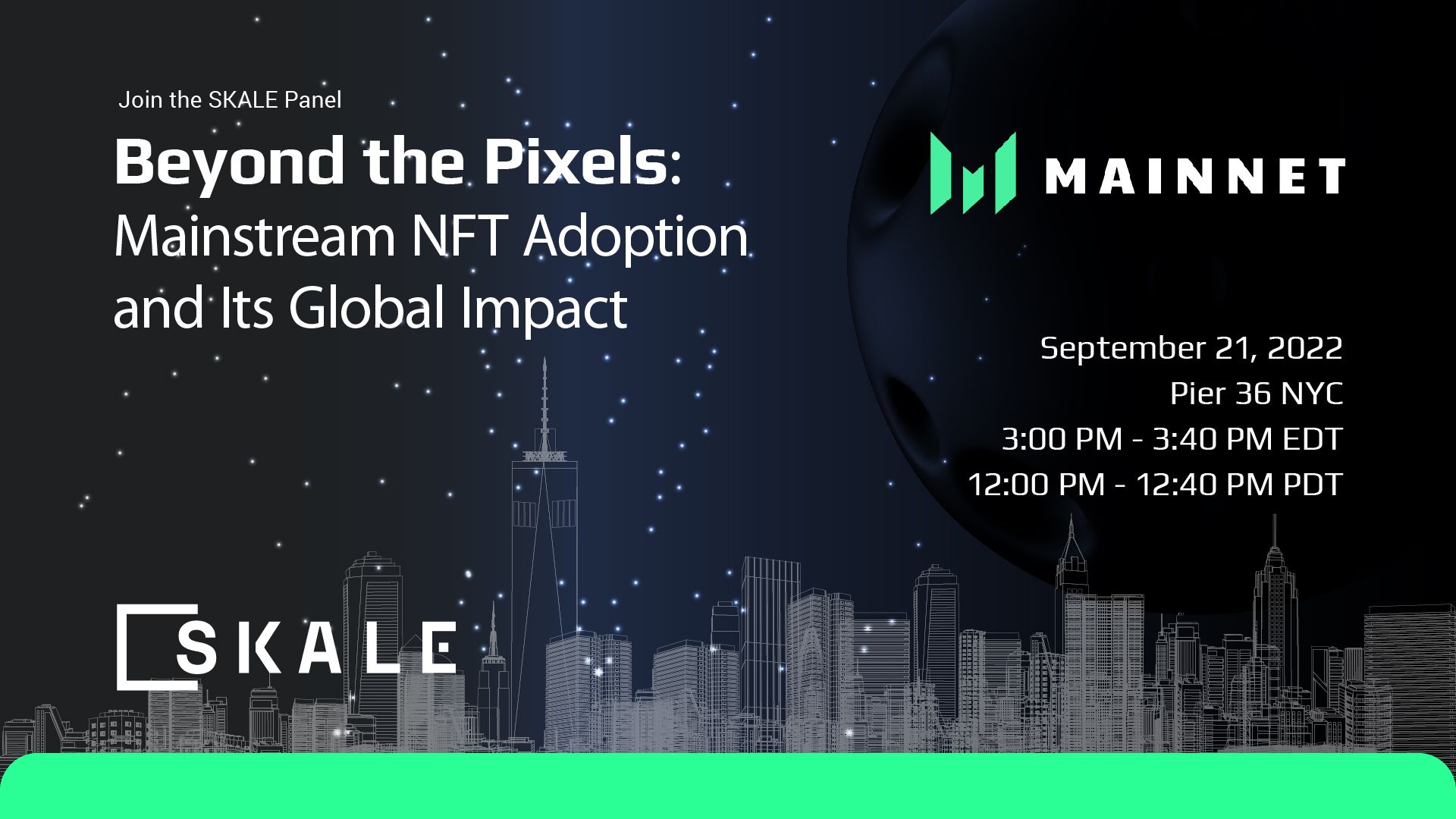