The SKALE Network is an Ethereum scaling solution. More specifically, SKALE acts as security and execution layer that connects with the Ethereum mainnet and lets developers build their projects faster and with better performance. It is a decentralized blockchain network that supports thousands of independent, interoperable blockchains, called SKALE Chains, all tied to the Ethereum public mainnet. This network forms an execution layer in the form of high-performance chains that facilitate transactions based upon on-chain escrows.
‍
The SKALE Network is comprised of thousands of independent validator nodes which will offer the security guarantees of a Layer 1 blockchain network but use resources in a more efficient, performant, and versatile manner. One thousand validators in the SKALE Network, for example, can support 8,000 independent chains. These chains could range from the smallest of chains to very large public and private blockchains each operating with faster commit times, lower transaction costs, and higher transaction throughput.
‍ 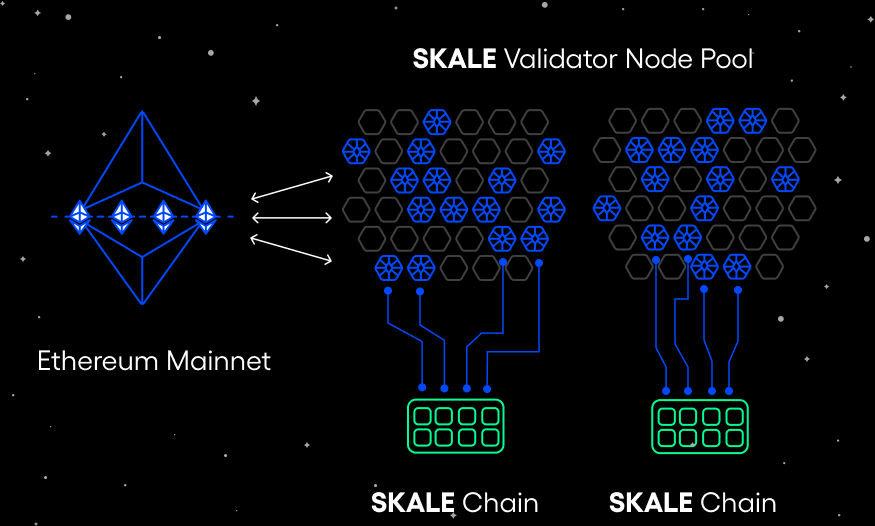 The Problem SKALE is Solving

To increase adoption of Ethereum-based applications – and decentralized solutions in general – the industry needs to scale not just transaction throughput, but also the user experience. Scaling the user experience means solving for transactions per second as well as solving for latency, connectivity to API-based wallets, cost-effectiveness, seamless messaging between chains, and much more.

The SKALE Network is an integral solution to blockchain scaling which addresses speed, security, ecosystem interoperability, AND transactions per second. It is a configurable network of blockchains that supports high-throughput and low-latency transactions without the high transaction costs found in public mainnets. The network offers native on-chain storage capabilities along with embedded connectivity and interchain messaging with the Ethereum mainnet. All of this is performed using a pooled transaction validation and security model that is efficient, scalable, and collusion resistant.
‍
The primary benefits are zero gas costs for users, faster commit times, and increased transaction throughput. Faster commit times translate into lower latency, which allows for a better user experience. Reduced gas costs benefits both developers and users and removes friction to mass adoption.
‍
SKALE chains can also provide a significant amount of additional on-chain storage capacity for decentralized applications. Storing data on public chains is costly and limited whereas data storage within the SKALE Network is more extensive and economical thereby reducing the challenges app developers run into when addressing the storage needs of decentralized apps.
‍
Using an Execution Layer solution like SKALE is highly effective for building and scaling Ethereum-based applications, opening up the potential for an ever-expanding spectrum of use cases from games and decentralized finance to productivity and media applications and everything in between.
‍ 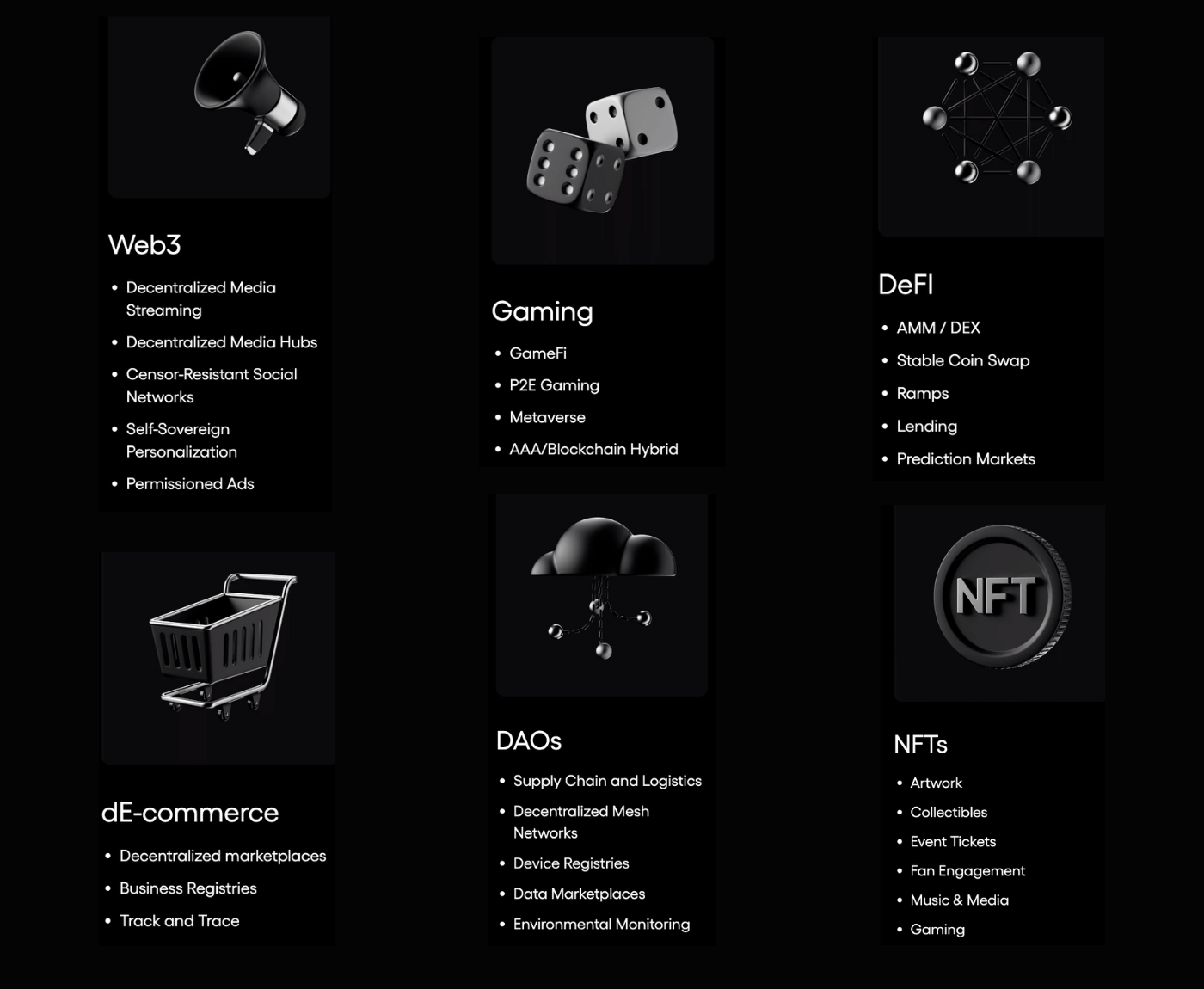 Why the SKALE Network is Unique

The SKALE Network offers a decentralized cloud for the provisioning and deployment of high-throughput low-latency blockchains. These blockchains are compatible with the Ethereum Virtual Machine (EVM) and offer configurable resource settings that include network size, transaction throughput, storage capacity, and enhanced security features.

Blockchains in the SKALE Network are operated by a group of virtualized subnodes selected from the larger set of nodes in the network. The blockchains use the node’s computation and storage resources – ranging from a portion of the node resources to all of the resources depending on the size of the chain selected. Each chain makes use of an asynchronous byzantine fault tolerant protocol as its consensus mechanism and can message other chains via a secure interchain messaging protocol.

In essence, the network can be viewed as a sophisticated container orchestration mechanism combined with a payment system – all in the service of running a blockchain network. The SKALE protocol and a corresponding SKALE token enable this powerful combination of processing potential with incentivized execution.

Traditional sidechains gain performance and low latency by using a smaller number of validator nodes but at a potential risk to the transaction integrity (under the theory that smaller sets of nodes are more susceptible to collusion and bribery). The SKALE Network counteracts this security risk by using a pooled validation model. This model leverages the security advantages offered by a large number of validator nodes by combining random node assignments with frequent node rotation among the validator sets. Therefore each independent blockchain is protected with the resources of the entire network.

To further secure the network, each validator must stake a significant amount of value into the network via a SKALE token. SKALE Chains are also resourced and provisioned by devlopers via a subscription model that also makes use of the SKALE token. These tokens are staked into the Ethereum mainnet and controlled by smart contracts there. Smart contracts on the mainnet also manage the token inflation and the monthly payouts to validators (including proceeds from the inflation). These smart contracts also handle the monitoring of node performance as well as the provision of penalties in the event of any malfeasance by a node.

The SKALE Network is a custodial execution layer (Layer 2). Whereas non-custodial approaches use a system of fraud proofs to allow funds to move between chains, SKALE makes use of BLS signatures, deposit boxes within the Ethereum mainnet, and other mechanisms to allow for custodial ownership and use within the network (which allows it to leverage the security guarantees of the mainnet but gain the performance inherent in Layer 2).

Whereas other Layer 2 models attempt to use mainnet interactions to run verification and/or fraud proofs, SKALE uses the Ethereum mainnet for staking and for other critical operations in a way that is better attuned for the creation of a robust and fully decentralized security and execution layer. The SKALE Network can also support non-custodial Layer 2 efforts and eventually will support other proven L2 solutions as they progress from research phase to production ready.

Creating and Using a SKALE Chain

Blockchains within the SKALE Network are highly configurable, with developers being able to choose the consensus protocol, virtual machine, parent blockchain, and additional security measures.
‍
When creating a SKALE chain, a developer first configures their chain via a decentralized interface and then submits payment to the network in the form of SKALE tokens. The token amount depends on the size of the network and the duration of time they want to sponsor the network resources. Storage capacity within the network is also configurable.

Because the SKALE Network is EVM-compatible, developers are able to use the same tools they use when working on the Ethereum mainnet. These include writing contracts in the Solidity language, connecting to the network via web3.js, web3.py, and using tools such as Truffle and Remix.

The SKALE Network also offers interchain messaging as a native capability. Interchain messaging is enabled by the virtualized subnodes which are able to validate that a transaction was signed and committed by the subnodes in another chain using BLS signatures (Boneh-Lynn-Shacham). This unique and decentralized form of messaging allows for patterns not unlike the use of push notifications or remote procedure calls in traditional Web2 development.
‍ 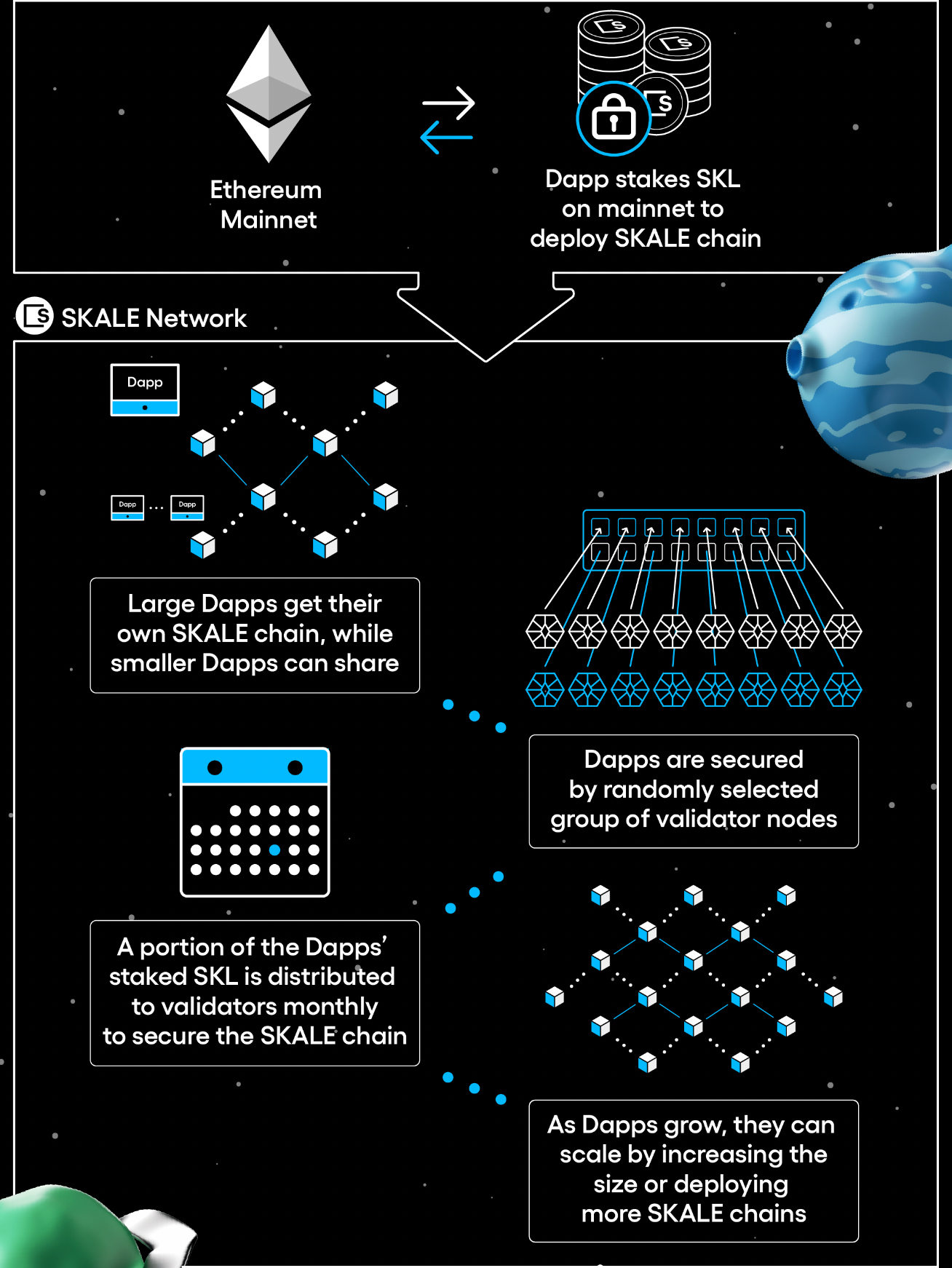 From Development to Large Scale Production

The SKALE Network has been built to be easy to use in development as well as expandable and performant for use in production. Developers can select chain characteristics and stake tokens and get immediate access to one or more SKALE chains. The resource configurations for these chains can also be modified seamlessly thereby accommodating increased transaction loads, storage requirements, security concerns, and other project needs. The network is an optimal solution not only for rapid development but also for use with even the largest production solution.

Because a blockchain in the SKALE Network can be easily resized, it lets chains move from a small chain size and limited transaction throughput up to a large chain with 2,000 transactions per second and highly expansive storage capacities. Resource changes take place in real-time without any additional operational efforts or node management by the user.

The net result means that the SKALE Network provides an easy-to-use and ready resource for even the most demanding defi, gaming, media, and productivity applications. Single developers, vendor networks, consortiums, and any other organizational types can make use of the SKALE Network to provide readily available, safe, and secure transaction processing for decentralized solutions.

The design and structure of the network also make moving from Web2 to Web3 a relatively effortless process. The development environment is the same as developing on the Ethereum mainnet, which has the largest global blockchain developer community with access to tens of thousands of developers and a suite of ready-made tools and other developer resources. With interchain messaging and on-chain storage, existing cloud developers will be able to use many of the same current patterns they use for building applications in the cloud. Additionally, there is no operational effort necessary for running blockchains aside from setting blockchain options and then staking tokens for the chain resources.

The SKALE Network is an open-source elastic blockchain network protocol. The mission is to make it quick and easy to set up cost-effective, high-performance blockchains that run full-state smart contracts. The SKALE Network aims to deliver a performant experience to developers that offers speed and functionality without giving up security or decentralization.

Get in Touch with SKALE