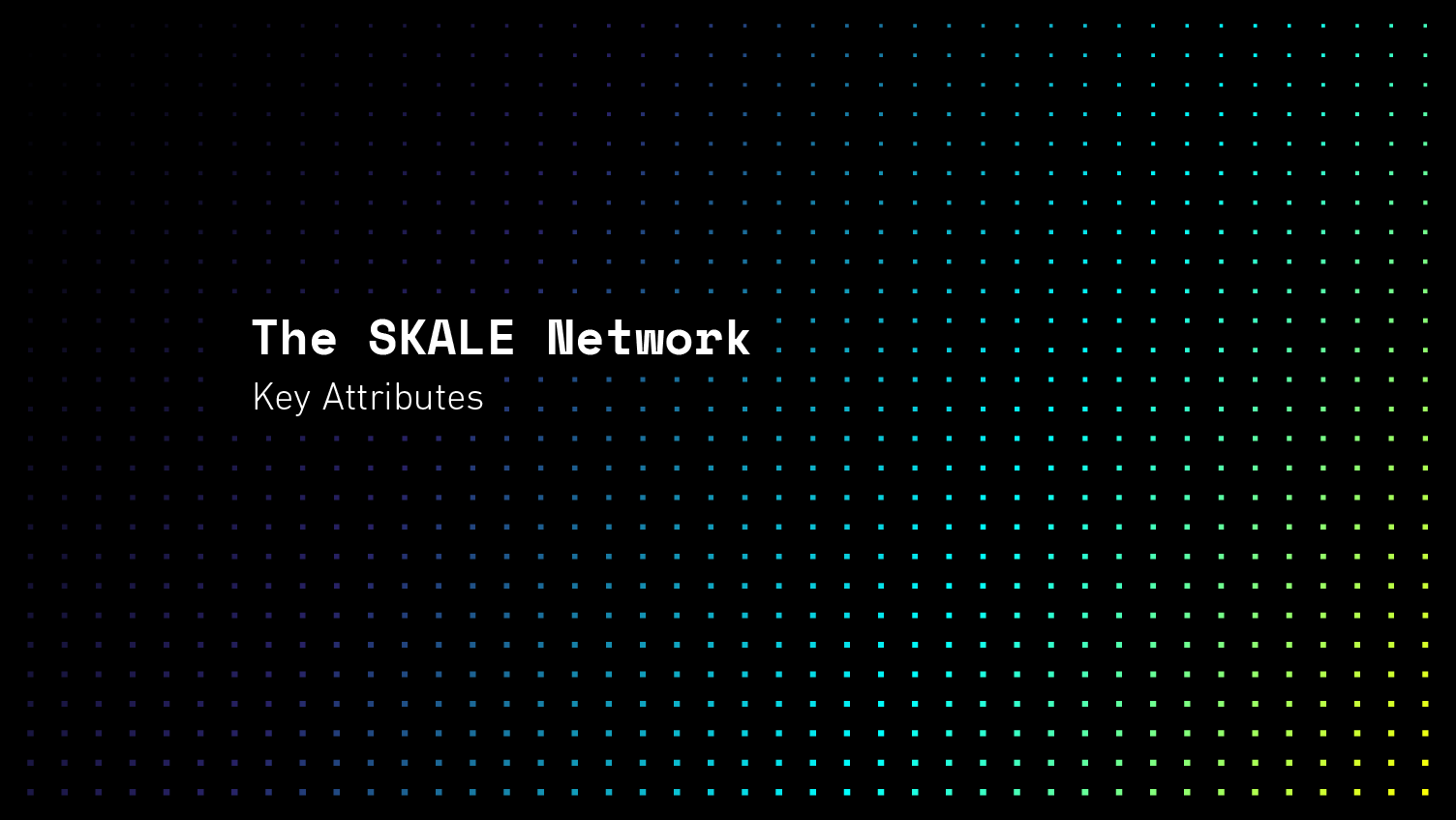 The SKALE Network is a security and execution layer that connects with the Ethereum network and lets developers build their projects faster and with better performance. It is an elastic and decentralized blockchain network that is built to support thousands of independent blockchains, sidechains, storage chains, and other types of subchains – all tied to the Ethereum public mainnet and fully compatible with the entire Ethereum ecosystem.

The SKALE Network is an elastic blockchain network that provides developers with a quick and easy way to set up cost-effective, high-performance sidechains capable of running full-state smart contracts. The goal is to deliver a performant experience to developers that offers speed and functionality without giving up security or decentralization. The network can support thousands of independent blockchains, sidechains, storage chains, and other types of subchains – all tied to the Ethereum public mainnet. The SKALE network uses a pooled validator model which allows it to leverage the security attributes of the entire network on behalf of each independent chain. Smart contracts running on the Ethereum mainnet along with a unique node virtualization and orchestration model helps ensure the network operates in a fully decentralized manner.

SKALE technology does not have the drawbacks of traditional sidechains in that the SKALE Network counteracts the security risk of small validator sets (a limiting factor with traditional sidechains) by using a pooled validation model that is efficient, scalable, and collusion-resistant. This model leverages the security advantages offered by a large number of validator nodes by combining random node assignments to each chain along with frequent node rotation among the validator set. This approach is called Random Rotation Incentive Scaling.

Each independent sidechain is protected with the resources of the entire network. SKALE’s network design employs the core principles of random selection and frequent node rotation, along with a sophisticated validator node incentive model, thereby preserving the integrity of transactions within each chain in the network.

The SKALE Network uses an innovative containerized architecture that provides industrial-grade performance and optionality for decentralized application developers. This architecture makes heavy use of virtualization within its node architecture. A single node can contain up to 128 virtualized subnodes. The resulting flexibility and performance are similar to the gains seen by traditional centralized cloud and microservice systems. Containers are divided into several main components encapsulated via a dockerized Linux OS.

The node virtualization is further enabled by the use of BLS (Boneh–Lynn–Shacham) threshold signatures. Each elastic sidechain supports this protocol which is applied to many levels and facets of the SKALE Network. Virtualized subnodes for each chain, for example, are able to validate that a transaction was signed and committed by the subnodes in another chain through the use of that chain’s group signature. This fast and secure form of interchain messaging is just one example of the native capabilities provided by BLS threshold signatures.

The consensus model used for block creation and commitment for each elastic sidechain within the SKALE Network is a variant of the Asynchronous Binary Byzantine Agreement (ABBA) protocol. The benefits of the ABBA protocol is that it is designed to exhibit robustness in the case of subnode downtime where each latent and/or down subnode is regarded as a slow link.

Fully Compatible with Solidity and the Ethereum Ecosystem

The SKALE Network uses Solidity as its contract language sparing developers from having to learn a new language or protocol. Solidity is an object-oriented, high-level language for implementing smart contracts and is used by the Ethereum Virtual Machine (EVM). The SKALE execution model is fully compatible with the EVM making it so that smart contracts that run on the Ethereum mainnet can also run on the SKALE Network.

Developers are also able to use the same tools they use when working on the Ethereum mainnet. These include connecting to the network via web3.js and web3.py as well as using tools such as Truffle and Remix. Additionally, the SKALE Network supports all major Ethereum token standards including ETH, ERC20, ERC721, ERC777, and Dai. Interchain messaging, as well as deposit boxes and token clones, ensures the integrity and fidelity of token operations with the SKALE Network.

Frictionless UX for Both the Developer and the End User

The accessibility, ease of deployment, and transaction performance of the SKALE Network will champion the next wave of innovative applications in the Ethereum space. High gas fees, multi-confirmation sequences, and long commit times will be replaced with seamless interactions that are in line with current user expectations. All these while offering the secure and trustless transaction capabilities that blockchain networks provide.

The SKALE Network is an open-source elastic blockchain network protocol. The mission is to make it quick and easy to set up cost-effective, high-performance sidechains that run full-state smart contracts. The SKALE Network aims to deliver a performant experience to developers that offers speed and functionality without giving up security or decentralization.

You can follow the SKALE Network on Telegram (@SkaleOfficial), Twitter (@SkaleNetwork), and Discord (www.skale.chat), visit the SKALE website (www.skale.network), read developer documentation at the SKALE Developer Portal (skale.network/docs), and see the code at Github (github.com/skalenetwork).